Just over 13,000 new non-EU international students arrived in Sweden in the 2020 autumn semester  – 44% lower than the previous year, according to the Swedish Higher Education Authority (UKÄ).

In its Overview of Swedish Higher Education and Research 2020, UKÄ noted that the 13,000 new incoming students were a “significant decrease” compared with autumn semester 2019 and most likely an effect of the coronavirus pandemic.

“In spite of the decrease in autumn semester 2020, we see no clear effects of the pandemic in the data on new incoming students for the entire 2019/20 academic year,” the report noted.

Around 40,000 students chose to travel to Sweden for studies in the 2019/20 academic year, with a third arriving as exchange students and two-thirds so called freemover students.

Since tuition fees were introduced in 2011 for students from outside of the EU/EEA and Switzerland, the number of students that pay fees has gradually increased.

“[In 2019/20] the number of new incoming students was just over 24,000, which was an increase compared with the previous academic year,” the paper added.

Students arriving from the US has “long been one of the countries sending the most new incoming students”, the report noted. However, 2019/20 marked the second academic year in a row numbers from the country had declined. 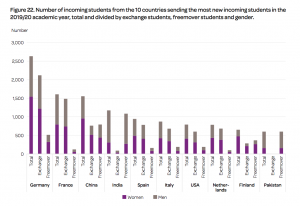 The report also revealed that just over 22,000 Swedish students studied abroad in the 2019/20.

“Of the first- and second-cycle graduates in 2019/20, only 14 per cent had spent a study or training period of at least three months abroad during the course of their studies. This is short of the goal of 20% that the EU Council of Ministers decided in 2011.

“Sweden continues to work towards fulfilling the goal.”