Campus France has launched a new campaign targeting prospective international students all over the world, with a particular focus on non-Francophone emerging countries in Asia, Indo-Pacific, Africa and Latin America.

The campaign is a “response to an intense and renewed desire for mobility two years into the pandemic”, according to Campus France executive director Béatrice Khaiat.

“It highlights the experiences as well as the promise of discovering the French way of life in addition to the notion that studying in France constitutes a milestone in everyone’s life.”

The new campaign is in keeping with the “Bienvenue en France” strategy launched in 2019, the agency noted, and has been designed to help to the country reach its target of hosting 500,000 international students by 2027 – a goal laid out in its strategy released in 2018.

“Countries where France is not a natural destination are generally non-Francophone countries,” a spokesperson told The PIE News.

“For this reason, Campus France encourages French higher education institutions to build greater numbers of programs in English. We are convinced that this will strengthen France’s position as one of the leading educational destinations for young people.”

Currently, a “solid choice” of 1,700 programs in English are available via the Taught in English catalogue.

“Through these programs in English, we would like to benefit from the potential arrival of a greater number of students initially heading to the United Kingdom who are looking for alternative countries after Brexit where to study in English,” Campus France told The PIE.

Like the 2020 campaign, the latest effort includes former international students who will work as ambassadors for the country’s international education sector.

“This campaign is really aimed at students from all over the world, which is why we include ambassadors from all regions,” the spokesperson added. 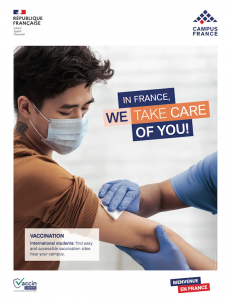 The campaign also highlights the quality and accessibility of care in France, including the access to Covid-19 vaccines for international students. Photo: Campus France

“We cannot deny that there are regions that interest us particularly: the emerging countries of Asia, Indo-Pacific, Africa and Latin America. We want to reach countries where France is not a natural destination.”

The eight new alumni who will be added to the profile of previous campaigns are spread across Biarritz, Pau, Orléans, Nice and Paris.

All of the Campus France ambassadors have chosen to stay in France after their studies and found jobs, the agency noted.

“We wanted to show real people and real success stories, which is what works best for us. The chances of finding a qualified job are good as long as alumni are motivated and prepared to join the local job market,” the spokesperson added.

“We would like to highlight that this year France ranks second in the Global Employability University Ranking (Times Higher Education),” they added. “This indicator points out the high quality of our universities and schools to employers around the world.”

The ambassadors also have an “E-Ambassadeurs” blog where they “write about their topics of predilection”, ranging from reasons that led them to choose to study in France to practical advice about living in the country.

“Most of them write in their mother tongues which results in more natural sounding texts about true experiences,” Campus France added.

While it is difficult to measure or predict the numbers of students that will join programs in French or English, it appears the majority currently study in French, the spokesperson continued.

“However, there are more and more universities, business schools, engineering schools, as well as other types of institutions that are aware of the strong demand for programs in English coming not only from international students but also from French students.”

The new campaign will be deployed across Campus France’s 275 local offices in 134 countries.