Posted on Dec 4, 2020 by Callan Quinn
Posted in News, under Europe.
Tagged with Campus France, Covid-19, France.
Bookmark the permalink.

Campus France, the national agency for the promotion of French higher education, has announced a new media campaign to encourage international students to apply to French institutions.

65,000 student visas were issued before the start of this academic year

“Students and alumni were selected after a call through our France alumni network, which regroups 320,000 alumni from French HE institutions,” explained Campus France communications director Florent Bonaventure.

He added that representatives came from a mix of backgrounds in different disciplines and institutions, both public and private, to represent the range of the French educational offer. 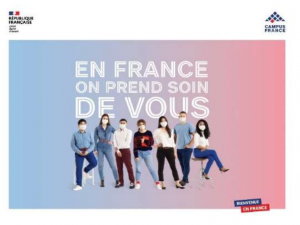 “Student ambassadors and alumni have a first hand experience of the French HE system,” he continued.

“They are the true prescriptors both to their friends and peers. Alumni are also role models: they demonstrate that former students in France get good and interesting jobs all over the world.”

Choose France with Anastasia, a Dutch alumni who studied in Paris and is now a researcher @imperialcollege

If you have studied in France and are based in the UK, join @FranceAlumni UK network!

According to Campus France’s Key Figures 2020 report, in 2018/19 the country hosted 358,000 international students, a 21% increase compared to five years previously.

Yet even as numbers increase, “France has suffered for several years now from the ever stronger appeal of English as a language of instruction, and from the appearance of new destinations”.

The agency said that a communications rethink in 2020 has allowed Campus France to cushion the consequences of the crisis on student mobility. A total of 65,000 student visas were issued ahead of the start of this academic year, a drop of 25%.

In addition, the country has seen a limited decrease in mobility of around 20%, although the number of incoming students varied depending on their region of origin.

Around half of Asian and American students did not come to France at the start of the 2020/21 academic year – although they may have nonetheless registered and begun studies online – while numbers of African students arriving did not change. North African and Gulf student numbers this year actually increased.

“Bienvenue en France has set out a clear target. Covid-19 makes the future more unpredictable, but we hope we can achieve this goal if students mobility returns to its former level,” said Bonaventure.

“The new campaign aims at indicating to applicants and incoming students that France is eager to welcome them and that French universities do care about them. There is a continued governmental ambition to attract international students from all over the world.”

The media campaign will be rolled out at Campus France’s 259 spaces and branches within French embassies in 127 countries and run for one year. It has already been translated into English and Spanish, and Campus France offices around the world have the option to translate it into local languages it needed.