Higher education institutions in Texas are seeing a marked decline in the number of international students accepting offers to study in the state. However, an inter-association survey shows the drastic country-wide drop in international students coming to the US feared by many in the Trump era will likely not materialise.

As of mid-May, international undergraduate ‘yield’ – the proportion of applicants that received an offer to study at one of 112 participating institutions in fall 2017 who accepted the offer – did drop by 2% compared to fall 2016.

But the Shifting Tides? survey, designed by IIE and distributed by four national associations, showed that with yield standing at 24%, “the situation is not as dire as has been predicted,” Rajika Bhandari, deputy vice president, research and evaluation at IIE, told The PIE News.

“The situation is not as dire as has been predicted”

“The assumption in the field has been that due to everything happening in the US, there will probably be a large drop in the numbers of students who eventually arrive in the fall,” she said.

More than half of the students either currently or considering studying in the US who took part in one survey last year said a Trump win made them feel less inclined to study in the country.

In fact, the dip is comparable with that of domestic student yield, which the survey showed was also down 2% to 28%.

And the findings at undergraduate level were more optimistic than another recent survey referenced in the report by the Council of Graduate Schools, in which 46% of graduate deans indicated a substantial decline in admission yield for international graduate students.

But undergraduate yield for schools in the southern region did suffer a more notable decline in international students, the IIE survey showed. The proportion of admitted students who accepted offers, though higher than elsewhere in the country, fell 5% in this region from 35% to 30%.

In comparison, the west and midwest regions each saw a 2% decline, to 24% and 21% respectively, while the northeast saw no change at 24%.

The most drastic change was in Texas, the third most popular destination state for international students, where the ratio of number of offers given and offers accepted dropped from 44% to 35%.

Yield in Texas did remain higher than the national average, but the decline was particularly notable given that yield in the other top three states stayed the same or increased.

New York and Massachusetts held steady at 22% and 31% respectively, while Californian institutions reported a 2% increase in yield to 25%. 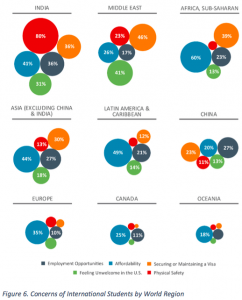 “One interpretation of the findings is that it probably has to do with concerns around safety,” commented Bhandari, pointing to an open carry gun law that came into effect in Texas in January 2016.

As of August 2016, public four-year universities in Texas must also allow concealed carry in buildings.

“It’s possible that future international students are concerned about that,” Bhandari said.

Four in five of institutions that took part in the survey said physical safety is the greatest worry among Indian students, while 31% said feeling unwelcome is also a concern among this group.

As a group, Indian students were more concerned about physical safety than those from any other country, survey respondents reported.

The report notes that given the small sample size, “country level data should be interpreted with caution”.

However, the survey does provide some insight into the mindset of students from different source markets, showing that more than a third of Indian (36%), Middle Eastern (46%) and sub-Saharan African (39%) students are worried about the probability of obtaining a visa.

When it came to predicting whether students who had received an offer would in fact arrive on campus, institutions had what the report labels “substantial and valid concerns” about Middle Eastern students.

In fact, 60% of institutions said they were either very or somewhat concerned that Middle Eastern students may not arrive in the fall. Sub-Saharan Africa and Asia were also areas of concern.

Efforts include both the nationwide #YouAreWelcomeHere campaign, and individual institutional efforts.

For example, almost 20% of survey respondents said their institution had increased personal communication with international students during this admissions cycle.

With some time remaining for students to accept offers to study in the US before the fall 2017 intake, the Shifting Tides? report provides a snapshot into the current state of play, rather than a definitive comparison of international student yield in 2017.

“It is still too early to tell if international student enrolment for the 2017-18 academic year has been negatively impacted, but we remain cautiously optimistic,” commented Esther Brimmer, CEO of NAFSA, one of the five partnering organisations that distributed the survey.

“One of the most promising indicators of the survey is that colleges and universities’ commitment to boosting recruitment efforts have yielded some very positive tangible results.”