Chinese, Indian and Nigerian students continued to drive the international student population of the UK in the 2021/22 academic year, with the country hosting a total of 679,970 non-UK students.

HESA statistics show that the international student numbers continued to grow, after the country famously hit its 600,000 target for 2030 a decade early.

First-year student numbers from non-EU countries have continued an upward trajectory, hitting 350,325 in 2021/22 – an increase of over 85,000 compared with the previous intake.

Overall, the first data release for the year shows a 24% rise in non-EU students and a 21% fall in numbers from EU countries, HESA noted.

The data signals that international postgrad research student numbers have remained fairly level, with non-EU students making up for a drop of almost 2,000 in PGR students from the EU.

Previous research has warned that the UK is losing ground to Germany and Canada in attracting international doctoral students. Non-EU PGR entrants, especially from China, have been driving the UK’s overall recruitment performance, the UUKi/ Education Insight 2022 report found.

Non-EU PGT students have been behind the over growth in PGT international students in the UK. Photo: HESA

Chinese students continue to make up the largest cohort of non-UK students, reaching a total of 151,690 in 2021/22. HESA noted that the overall number of students from India stood at 126,535, a rise of 50% compared with the previous year when UK institutions hosted 84,555 students from the country.

Along with the impact of the loss of home fee status for EU students and the graduate route attracting international students from non-EU countries, she added that “the 2021/22 academic year was marked by increased freedom of movement when compared with earlier phases of the pandemic”. 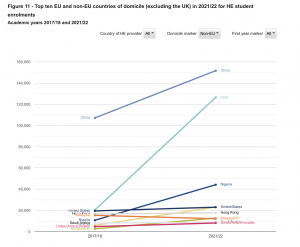 HESA pointed out that numbers from Malaysia saw a decline of 21% over the five years, dropping below Nigeria, in addition to the US, Hong Kong and Pakistan.

United Arab Emirates and Bangladesh rose into the top 10 non-EU student source countries in 2021/22, it added.

The University of Glasgow leapfrogged King’s College London (17,155 internationals) and Coventry University (15,565), to host the fourth most international students in 2021/22. It enrolled 17,390 students from overseas.

In 2022, Glasgow warned international students not to travel to the city unless they had already arranged accommodation.

“Over the five-year time series, postgraduate study in EU countries has increased year-on-year”

Outside the EU, 448,750 students were enrolled on UK TNE programs, with 83,710 from inside the region doing the same.

Overall the 2021/22 TNE numbers were up by 44,365, with HESA highlighting Liverpool John Moores University and The University of East London seeing 7,305 and 4,855 number growth, respectively.

“Both providers have expanded their partnership provision and as a result, almost doubled their student numbers from 2020/21,” the organisation said.

Courses through overseas partner organisation was the most popular type of provision within EU (28,195 enrolments), and outside the EU, other arrangements including collaborative provision saw the highest number of enrolments, attracting 201,280 enrolments.

“Over the five-year time series, postgraduate study in EU countries has increased year-on-year,” HESA said. The figure hit 40,990 in 2021/22.

In 2021/22, 66% of students based overseas were enrolled in undergraduate program, HESA added.