Posted on Sep 29, 2020 by Will Nott
Posted in Covid-19, News, under Europe.
Tagged with British Council, Coronavirus, Coventry University.
Bookmark the permalink.

Over half of Chinese undergraduate and postgraduate students who have applied to UK universities may cancel or delay their plans to study overseas for the 2020/2021 academic year, The PIE News has learnt.

Data from a British Council survey that is yet to be published revealed that 26% of Chinese undergraduates and 27% of Chinese postgraduate respondents who had applied to study in the UK say they had either cancelled or delayed their plans, or were “somewhat likely” or “very likely” to do so.

A further 31% of undergraduates and 27% of postgraduates from China were still uncertain, saying they were neither likely nor unlikely to cancel or delay plans.

Earlier this month, UCAS released figures that showed that there had been a record number of international undergrads accepted onto UK courses, with the majority of non-EU students accepted coming from China (12,980).

However, stakeholders have warned that although there have been high numbers of applications and acceptances for international students, it doesn’t mean that they will enrol and make it to UK campuses.

“In our August survey, around a quarter to nearly a third of our Chinese respondents seemed to still be undecided about what they will do this year,” Matt Durnin, global head of insights & consultancy for the British Council, told The PIE.

“31% of prospective undergraduate respondents and 27% of those at the postgraduate level said that they were “neither likely nor unlikely” to cancel or delay their overseas study plans.

“So nearly at the start of the term, a significant portion of our incoming students still seemed to be unsure about what they were going to do. I’m not convinced that this has materially changed in the last few weeks since the survey closed,” he added.

The British Council’s survey was conducted in August and had responses from 518 mainland Chinese undergraduates and 1,145 postgraduates. All of the students have applied to a UK institution.

There were some – 7% of undergraduates and 14% of postgraduates – who said they had already cancelled or delayed their travel plans. 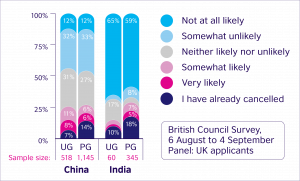 Q: How likely are you to cancel or delay your plans to study overseas for the 2020/2021 academic year? Source: British Council

But David Pilsbury, deputy vice-chancellor (International Development), at Coventry University told The PIE that only a small proportion of overseas students come through UCAS so the figures should not be extrapolated to the whole market.

“Most universities are seeing big increases in applications and of those a significant increase in acceptances as the demand for quality education in the UK is still there, but that doesn’t mean they will enrol this September – acceptance is intent, not action,” he said.

“Recruitment is still very challenging because we are not able to offer the full international experience, plus despite great efforts to charter planes there are challenges for students to get here from some countries still and students are concerned about access to health, well being and their own personal security,” he added.

These recruitment challenges vary by country. The British Council’s data showed that 81% of all Chinese students surveyed were very concerned about health and wellbeing.

Durnin told The PIE that the issue of flights is also a particular concern for the Chinese market.

“At first glance, the capacity shouldn’t be a huge problem if they make use of the major hubs. Prices even look okay for flights with a stopover,” he said.

“But the problem is that many of the relevant hubs that are still functioning are viewed as high risk for Covid-19 transmission and Chinese students don’t appear willing to take those routes.”

While the British Council’s data showed that there is significant uncertainty when it comes to the Chinese market, the outlook for other markets is more positive.

Indian students who had accepted places at UK universities said they were far less likely to cancel their travel plans.

“The student sentiments that we’ve gathered vary a lot across markets – for instance, we’ve seen much firmer intentions to keep study plans in India and Pakistan than we saw in China.

“The majority of respondents in South Asia seem to be very confident about keeping their plans,” continued Durnin.

These differences between markets will determine the outcomes for individual institutions in the UK according to Coventry’s Pilsbury.

“The outcome for this Autumn is still unknown and I expect it will be very different for institutions depending on their exposure to different markets, how they have managed communications around Covid during the crisis and their operational response to the crisis,” he added.