Can digital English testing – adopted by a significant number of universities during the pandemic – continue to support the UK higher education sector? This was the main question at a recent roundtable hosted by The PIE and Duolingo in London.

When the pandemic forced the closure of physical testing centres across the globe due to health and safety concerns, students who needed to take a standardised English language test to study in the UK needed an online option.

Many UK universities responded by accepting Duolingo English Test results, before traditional test centre-based exams such as IELTS and TOEFL, as well as other providers, launched online alternatives of their own.

But as the pandemic’s impact wanes and university recruitment and admissions functions resume in a more conventional capacity, what will the role of online tests be as the market moves forward?

A group of UK university representatives gathered in London to discuss this issue. The roundtable – moderated by the PIE’s Amy Baker – was also attended by DET’s senior director of Strategic Engagement Jen Dewar, general manager of the DET Rogelio Alvarez and, later, Duolingo co-founder and CEO Luis von Ahn.

A regional manager of international recruitment for a public research university noted that her university adopted the DET because of the lockdown that occurred during the pandemic in China.

“We made a case to senior management who made a decision to accept [the test],” she said, adding that the university could continue to accept the test through at least next year.

Indeed, Duolingo’s Alvarez noted that while the pandemic certainly wasn’t anticipated nor welcomed, its impact boosted the DET – thousands of universities globally began accepting the online exam due to the unprecedented circumstances.

“This was an opportunity to share with the world that this was the right thing to do, to put something digital-first to address these challenges,” he said. The trend had been already happening, but “the pandemic just accelerated that,” he added.

One attendee said he now regretted how he had framed the DET when asking university leadership to adopt the online test. “At the start of the pandemic, like a lot of institutions, we kind of hurriedly accepted the Duolingo test and we got this through in record time,” he said. But, looking back, he wished he had highlighted the advantages and value of the DET rather than pitching it as a pandemic stop-gap solution.

“I framed the argument around accepting the Duolingo test as an emergency situation,” he remembered. “Now I wish I had given a bit more of an understanding that the market is shifting and changing, and is more competitive, and we need to be able to respond to that.”

He added that there was an “issue among the academic community related to perception with regards to online testing overall. “I don’t think all of those concerns are legitimate, and I think they’re very much based on anecdotes,” he said.

In many ways, an online exam allows for even greater integrity, said Duolingo’s Dewar, because security for a “digital-first” test harnesses the benefits of both AI and human proctoring. In addition to a number of basic rules – including no ear buds, a private room, no pens or paper – the test is recorded and asynchronously proctored. The test recording is reviewed by AI, which can efficiently process huge amounts of information and flag potential areas of concern, and humans, to interpret the data and make judgements on the test session’s validity. As AI is not always perfect, it’s useful to have “a human in the loop,” Dewar added.

“We have an issue of having a large number of applications a year. That’s a good problem to have”

A director of international student recruitment at a university in London said that her university, after accepting the DET during the pandemic, has since dropped the test as an option for students. 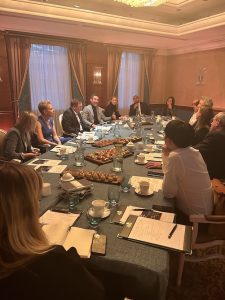 “We don’t have a recruitment issue,” she said. “We have an issue of having a large number of applications a year. That’s a good problem to have. But, like many other universities, we have a bit of a challenge in terms of diversification.”

However, her concern about being overly reliant on big source countries could be alleviated via online tests. The advantages of removing financial and geographic barriers allows universities to cast an even wider net for global talent, to encompass countries in Latin America and Africa, thus diversifying a campus population while retaining high levels of academic and English-language requirements.

Students from refugee populations have, for example, taken the DET and gotten offers at global universities.

Duolingo co-founder Luis von Ahn closed the roundtable with his recollection about the founding of his company, based on a mission which underscores all that it does today – to use technology to lower barriers to education and, in doing so, promote equal access.

“We started Duolingo with the idea to teach everybody, whether you’re rich or poor,” he said. “The idea was to teach for free.”

See more photos from the event here. This is an article written for The PIE by Anna Esaki-Smith.