Three stakeholders involved in helping the shift to online education happen spoke about the need to ensure students feel supported as central to a successful experience.

"All of these institutions realised, you know what? I don't have anything to handle my student services"

Speaking at The PIE’s inaugural webinar, Jonathan Whitehouse of University Bridge shared with delegates that students studying across his network of colleges in the US seemed largely content with the shift in delivery.

“I think the University Bridge advisors have been absolutely fantastic because they’re available every day online,” he shared. “They’ll talk to the students through social media however they want.”

With polling during the webinar indicating that almost 40% of voting participants believed “only a minority” students were satisfied, The PIE’s Amy Baker quizzed Whitehouse on his own viewpoint.

“I mean, there are a few who said they found it very, very difficult. There’s no question. But there’s always going to be. I mean, even with face to face classes,” he said.

One of our advisors looks after about 15 to 20 students

He continued, “They get a lot of support; one of our advisors looks after about 15 to 20 students. And I think that’s what makes them feel reassured.”

The student cohort had even managed to move a dance class online, Whitehouse remarked – explaining many of the international students were also living in shared accommodation and still in the US.

Representing ConexED, Peter Phippen also shared how his learning-and-engagement platform helps connect students with the panoply of advisers they may wish to speak with. 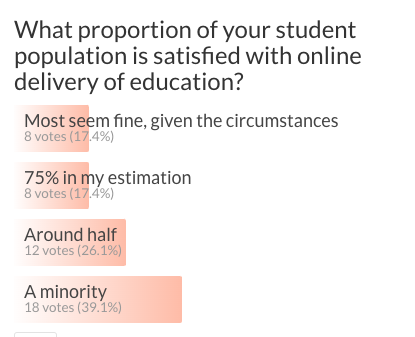 A small poll during The PIE Webinar

Phippen said he was having conversations on a daily basis with university leaders who had been focused on the online curriculum and infrastructure, but had not thought about student services.

“What they didn’t quite realise was when you closed campus, everybody starts freaking out and all of a sudden your students are like, what about my scholarship? Can I go see my family? Can I do this? Can I do that? And all of a sudden, all of these institutions realised, you know what? I don’t have anything to handle my student services.”

He said one community college partner of theirs had been using ConexED to facilitate about 35 meetings per day prior to campus closure.

“If there’s one thing I have learned during this pandemic, it is that the admissions cycle does not stop”

“Campus closed, and all of a sudden that shot up to about 700 meetings per day.”

At iTEP, Jim Brosam shared how his organisation was helping institutions offer a remote testing alternative for institutions keen to continue the admissions and acceptance cycle going.

“I think if there’s one thing I have learned during this pandemic crisis, it is that the admissions cycle does not stop. The show must go on,” shared Brosam.

“And we have schools who are actively recruiting in the USA and Canada; all around the world agents are actively working. And so international admissions testing is a part of that.”

Brosam shared that main queries from institutions were around security and smooth delivery of tests – explaining the subtle distinctions between live and virtual proctoring.

Live proctoring is literally having someone watch a student via their webcam complete a test (often a few students at a time, Brosam explained) versus virtual proctoring which uses various tech solutions, such as facial tracking, for example.

“At iTEP, we’ve looked at all of it and tried to come up with a highly secure but common sense approach,” he related.

” We have security software that during the test actually shoots one photo per minute- and the test taker knows he or she is on camera, but they don’t know when the photo is taking.”

He acknowledged that internet accessibility was also an issue to be considered.

“Now we are taking our testing out of a controlled test centre or a controlled university campus computer lab, where we know the Wi-Fi speed and we know the technical specs of the computer,” he said.

We tell people: when the electricity goes out or when your Internet freezes, don’t panic

“We’ve worked really hard to make our test as easily deliverable as possible.

“We tell people: when the electricity goes out or when your Internet freezes, don’t panic because if you’ve completed the first two sections, those have already saved…  all you have to do is wait a few minutes, reboot, go back into the test and it will start up on the unfinished section.”

Internet accessibility was another hurdle as Whitehouse accepted. He said, “A lot of the systems do use Google and that’s blocked in China. But we have some incredibly talented students who even create their own VPN sometimes, so they never cease to amaze me.”

Hurdles in terms of using tech platforms notwithstanding, Whitehouse also made the point that some students seemed to excel with learning online.

“We’ve got a couple of students the moment doing fantastically well,” he shared. “We’ve got one one in China… when he joins the community face to face it will be fascinating to see whether the grades go up or go down. He’s well-motivated, he can study very well by himself.

“Some people are more independent than other people. I think this is very, very important.”

Details of the next PIE Webinar can be found here.