Posted on Apr 15, 2020 by Viggo Stacey
Posted in Covid-19, News, under Global.
Tagged with Coronavirus, QS, Recruitment.
Bookmark the permalink.

Almost half of prospective international students whose study plans have been affected by coronavirus are intending to defer their studies as a result, while just short of one in 10 have indicated that they no longer want to study overseas, an analysis from global higher education experts QS has shown.

42% stated that they had no interest in studying online

According to the ‘Impact of the coronavirus on global higher education’ report – surveying around 11,000 international students – 46% of prospective student respondents said the coronavirus had impacted their study plans, while a further 25% said they did not know.

Over a period of six weeks, numbers of students suggesting their plans had been impacted grew. In mid-February, 60% said they had not been affected, but towards the end of March, that figure had shrunk to a mere 14%. 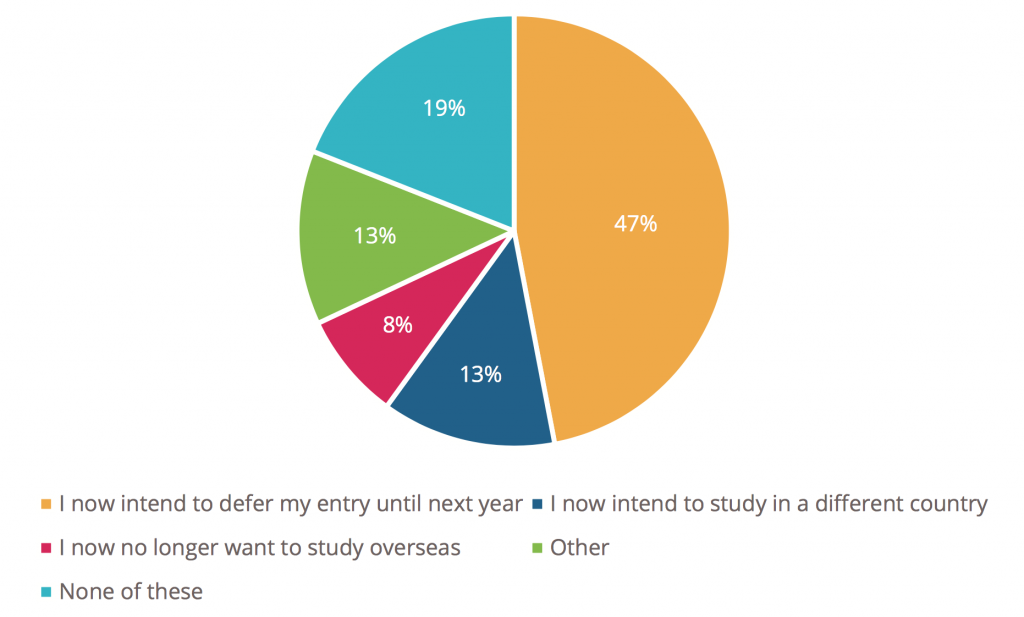 Almost a third (29%) said they did not know, as 57% suggested the pandemic had impacted their plans.

One positive takeaway is that the proportion of students suggesting the pandemic had caused them to cancel their study abroad plans had declined over the six weeks the survey was collected.

Between February 18 and March 5, 22% of respondents said they no longer wanted to study abroad. By March 26, that proportion has shrunk to 6%.

In an online webinar, content marketing manager at QS North America, Amity Bacon, indicated that higher education providers will need to pivot in order to engage with prospective students.

“Institutions have to roll up their sleeves in the next few years and work hard to achieve their voice, brand, and presence post COVID-19.

“Students will not find [institutions] in the same ways,” she said.

It showed that 17% of institutions said that they would admit students who hadn’t completed the required language tests due to COVID-19, while 27% said they were still considering this change.

“Students will not find [institutions] in the same ways”

As universities come to terms with “significantly reduced” revenue from international student tuition in the next academic year, “consistently adapting to this new normal will be crucial in the months to come” the report noted.

As 50% of institutions indicated the pandemic would have a “detrimental impact on the number of student applications” – 26% said they thought the numbers would stay the same – around a third (34%) said they were looking to diversify source countries for recruitment.

“Universities can continuously strive to deliver high-quality teaching and consistent communication to students,” the report urged.

“To do so, it’s imperative that institutions listen to students’ needs and concerns and leverage the latest technological tools.”