Financial restrictions and a flexible working environment mean parents worldwide are receptive to the idea of an online post-secondary education, according to a recent survey. Two thirds of parents who took part said they would consider an online degree for their child if it were cheaper than an on-campus equivalent or free.

HSBC’s Value of Education survey also showed that two fifths of parents worldwide would consider sending their child abroad to study for their post-secondary education. However, a third do not know how much it would cost for their child to do so.

Cost is no small factor for parents who are helping their child make choices about their education, the report notes. The vast majority of parents who took part – 85% – are currently contributing financially to their child’s university or college studies.

Parents globally spend an average of $44,221 on their children’s education from primary through to tertiary education, including fees, transport, books and accommodation.

Parents in Hong Kong contributed the most towards their children’s education – an average of $132,161 – followed by those in the UAE and Singapore.

This is the first time the worldwide survey, which looks at parents’ motivations and priorities for their children’s education, has looked at online education.

Nearly three quarters of the 8,481 parents who took part said they were aware of online degrees. Sixty percent said they would consider one as an option for their children if it were cheaper than a traditional degree, with a further 7% saying they would only consider it if the course were free.

However, the price difference would need to be considerable for many parents to entertain online degrees as a realistic prospect.

Nearly a third (30%) said they would only be open to an online degree if it were 50% cheaper than an on-campus course, and just under a fifth (18%) said it would have to be 75% cheaper. 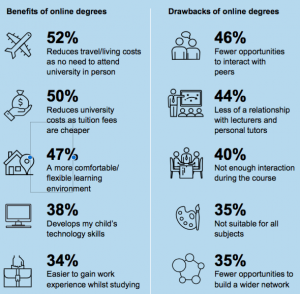 Meanwhile, 47% said they thought the flexible or comfortable working environment offered with an online degree would be beneficial, while 38% said it would improve their child’s technology skills and 34% that it would be easier for them to get work experience.

“The digital campus offers online education that is flexible and catered to fit around differing work and life demands, enabling students to work, earn and learn in some of the world’s best institutions without having to move home, leave their job or sacrifice their career,” commented Timothy Quine, vice-chancellor of the University of Exeter, in the report.

The survey also showed considerable interest in sending children abroad to study, particularly among parents in the Middle East and Asia.

Overall, 41% of parents with a child not in postgraduate education said they would consider sending their child abroad for university.

The US was the most aspired-to destination, chosen by 47% of survey participants, followed by Australia and the UK.

Some parents have a more specific destination in mind for their children. Of those who said they would consider an overseas education, two fifths (39%) had a specific university in mind – rising to more than half in markets like Indonesia, the UAE and Malaysia.

Employability is a large motivator for parents to send their children overseas, noted University of Southampton vice president (international) Colin Grant, commenting on the report.

“This also includes places with relatively small populations such as Singapore, Hong Kong, and Taiwan, where high fliers are focused on developing international skills and experiences to give them a real competitive advantage.”

This is borne out in the findings that the opportunity to gain foreign language skills or international work experience were among parents’ top reasons for wanting their child to experience tertiary education abroad, both cited by 49% of those considering it.

Meanwhile, 48% of parents cited exposure to new experiences, ideas and cultures as a reason.

Security fears, concern over students getting homesick and missing the child themselves were also among the barriers parents mentioned.