Posted on Jun 3, 2019 by Kerrie Kennedy
Posted in News, under North America.
Tagged with America, NAFSA, US.
Bookmark the permalink.

NAFSA has released a new report outlining the harm that declining enrolment of international students and scholars is causing to the US and calling on Congress to take action to stop what it describes as a “national threat”.

According to the report, ‘Losing Talent: An Economic and National Security Risk America Can’t Ignore’, dangerous policies and anti-immigrant rhetoric have created a chilling effect on enrolment, as the US is increasingly viewed as unwelcoming to international students and scholars.

The report estimates the combined 10% decline of new international student enrolment — between fall 2016 and fall 2017 — cost the US economy $5.5 billion and more than 40,000 jobs.

The most recent figures showed that the 1,094,792 international students studying at US colleges and universities contributed $39 billion and supported more than 455,000 jobs during the 2017–2018 academic year.

However, while the number of students pursuing education outside of their home country has more than doubled since 2001, the US share of this globally-mobile student population was shown to have dropped from 28% in 2001 to 22% in 2018.

The report suggests that reasons for the decline include concern on the part of international students and their parents about US federal policies and rhetoric on immigration, along with apprehensions of personal safety and tense race relations.

“A significant proportion of institutions report that the US social and political environment (60%) and feeling unwelcome in the United States (48.9%) are factors contributing to new international student declines,” states the report.

“Colleges and universities also cite a significant increase (11%) in concerns about physical safety in the United States, including gun violence and civil unrest (43.6%).”

“The double-digit enrolment increases in these and other countries run counter to the US decline and demonstrate how the United States is losing market share of the world’s talent,” it explained.

It added that while Chinese investment in Africa is strategic and forward-facing, “the United States misses limitless opportunities for collaboration”.

And, while members of Congress on both sides of the aisle agree that America becomes more competitive by attracting the world’s best talent, it stated that “policy changes must be enacted to positively change course”.

“Only then will we have a United States where the best and brightest are truly able to contribute to the economy and innovation,” the report concluded. 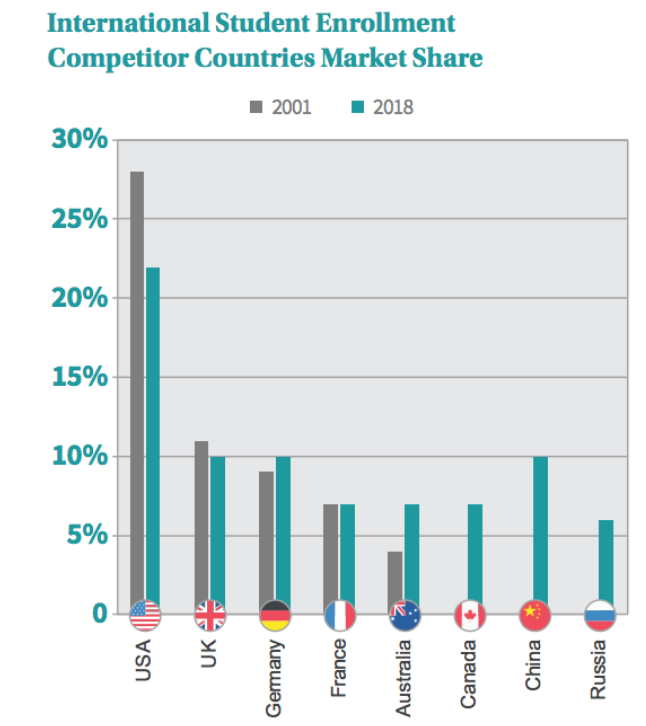 Commenting on the report, NAFSA executive director and CEO Esther D. Brimmer said the downward trend must stop in order for the US to remain competitive in the global market.

“After more than a decade of enrollment growth, the United States’ two years of declining new international student enrollment for the first time since 2003, is of grave concern to foreign policy experts and economists alike,” said Brimmer.

“International students and scholars are truly great for America,” she added.

The report also includes endorsements of this sentiment from big names such as Tim Cook at Apple and Colin Powell.

Powell, who was one of the plenary speakers at this year’s NAFSA conference, noted, “I can think of no more valuable asset to our country than the friendship of future world leaders who have been educated here.”

2 Responses to US could have lost US$5.5bn in value from declining market share – NAFSA