Posted on Nov 13, 2018 by Kerrie Kennedy
Posted in Data, News, under North America.
Tagged with IIE, Open Doors, US.
Bookmark the permalink.

Despite the number of international students in the US surpassing the one million mark for the third consecutive year, new student enrolments fell by 6.6% in 2017/18, the latest data from Open Doors has revealed.

China and India made up the largest portion of the total, with increases of 3.6% and 5.4% respectively on 2016/17 figures

According to the 2018 Open Doors Report on International Educational Exchange, international student numbers in the US increased by 1.5% in 2017/18 to reach 1,094,792, up from just over 1.08 million in the previous period.

However, while the overall numbers of international students increased, new student enrolments declined by 19,098 (6.6%), corroborating findings from the 2017 fall survey and continuing a slowing or downward trend first observed in the 2015/16 academic year.

According to the report, current gains in the total number of international students are due primarily to increased participation in the Optional Practical Training program (up 15.8%), which allows international students to practice their skills in the US for up to 12 months or up to 36 months for graduate students in STEM fields.

Among new enrolments, declines were seen primarily at the non-degree (-9.7%) and undergraduate (-6.3%) levels.

The largest percentage growth, however, was seen in Nepalese student numbers (14.3%), likely driven by ongoing political turmoil in the country coupled with the after-effects of a devastating earthquake in 2015.

Meanwhile, the most notable decline in numbers was seen in students from Saudi Arabia (-15.5%), which follows cuts to the outbound King Abdullah Scholarship Program that has dramatically curbed outbound mobility. 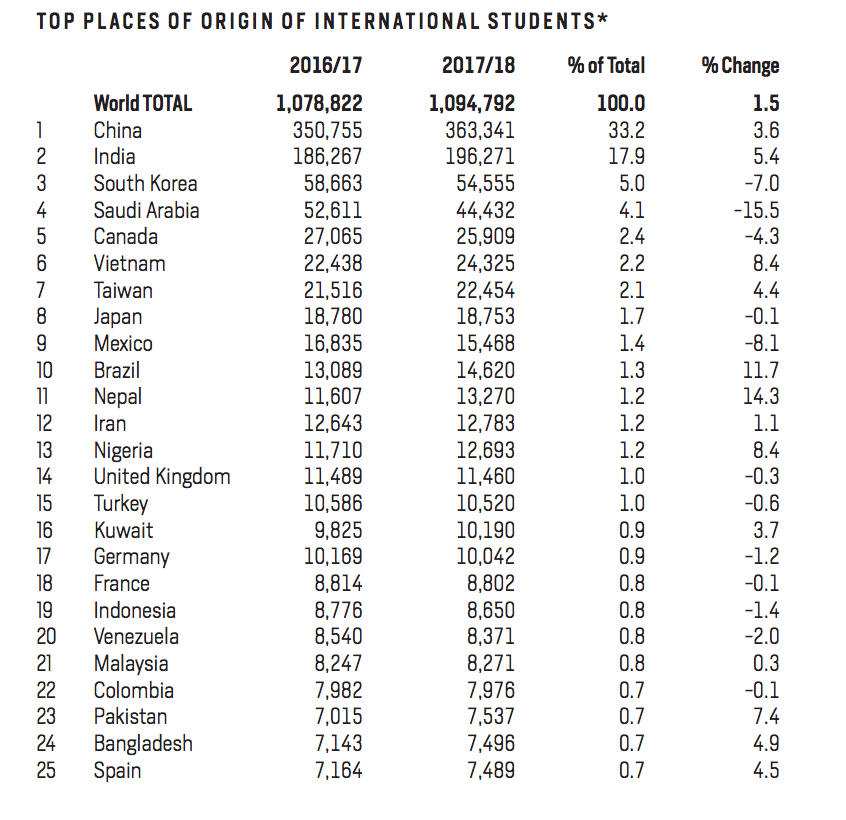 Top places of origin for international students in the US. Image: Open Doors

Speaking to The PIE News, executive vice president of global engagement and research at Studyportals, Rahul Choudaha, described the 6.6% decline in new enrolment as “an ominous trend”.

“OPT has been a significant boost for the enrollment in STEM-focused programs, especially at master’s level. Excluding OPT, the effect of anti-immigrant rhetoric becoming more apparent in the decline of new enrollment at both undergraduate and graduate levels; a decline of 6.6% in new enrollment is an ominous trend,” he said.

Choudaha said that while student choices are driven by a complex interplay of variables, “anti-immigrant rhetoric has surely slowed the growth momentum for a segment of students”.

“For example, the appetite to study abroad remains strong in India, but the rhetoric of stricter immigration and post-study policies played an important role in the decline of 8.8% at graduate level enrollment in Fall 2017/18,” he added.

“A decline of 6.6% in new enrollment is an ominous trend”

Additionally, the report showed that international students continued to make a significant financial impact on the US in 2017, contributing $42.4 billion (up from $39bn in 2016) to the economy through tuition and other expenses, according to the US Department of Commerce.

Marie Royce, assistant secretary of State for Educational and Cultural Affairs said that international students studying alongside Americans are a tremendous asset to the US.

“We need to develop leaders in all fields who can take on our toughest challenges. We need people who can find solutions that keep us secure and make us more prosperous.

We want to send a message that international education makes us stronger as a country,” she added.

As for US students, study abroad numbers were revealed to have grown by 2.3% to 332,727 in 2016/17, while the profile of US students going abroad has also continued to diversify.

“International students have more choices than ever before on where to pursue higher education. The dedication of American colleges and universities to students’ academic, professional, and personal success is one of the main factors in our international competitiveness.”

“American universities and colleges must become more data-informed regarding defining their positioning and mapping it with an ideal segment of students. An approach of being everything to everyone is over, and insights that drive recruitment strategies are becoming even more important.”