International schools are projected to enrol nearly seven million students by 2023 as they increasingly become the first choice for local families, a new report by ISC Research shows. But as their popularity grows, new challenges arise to ensure that students are well supported in their progression to a university abroad.

Based on a variety of data sources, including a survey with college counsellors and school heads at EMI K-12 international schools conducted last year in partnership with BUILA, the Pathway from International School to University report charts substantial growth in the number of international schools and a shift in their student body.

“Students are considering not just two or three countries for higher education, but a wide range”

Projections indicate that the market value will reach $66.6bn by 2023, while schools will cater to almost seven million students.

The report explains that the main reasons behind the impressive popularity of English medium instruction lie in the shifting dynamics of international education and the job market, with English being the language of instruction in the most popular destination countries and being widely regarded as a passport to a successful career.

International school graduates also record higher-than-average grades in the three popular qualifications (A Levels, IB and Advanced Placement), although English is not the first language of four out of five students. 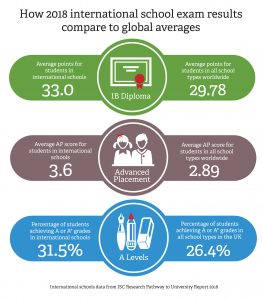 While a sizeable majority of graduates gain admission to university – 83% of schools surveyed said 90% of their 2018 graduates were offered a place – the report identified some challenges for schools guiding them through their transition to a university abroad.

“For many international schools, their students are considering not just two or three countries for higher education, but a wide range,” Diane Glass, Commercial director, ISC Research told The PIE News.

“The research identified that there is a huge challenge for international schools to remain well informed of all higher education opportunities in all the countries that could be considered by their students.”

One of these challenges is grappling with changing immigration policies in destination countries.

But information on visa application was mentioned by counsellors as an area for improvement, while issues with immigration policies and the need to manage expectations for post-study work were brought up in semi-structured interviews with nine counsellors.

Glass explained that for many international schools there may be only one college counsellor guiding students and families on the transition to higher education, and it may be challenging for them to maintain awareness of all the policy changes for all the countries that students may be considering.

“Associations representing universities in a country need to be more proactive about informing international schools and their college counsellors about immigration policy changes and post-study work visas in order to ensure such benefits are considered during the student selection process,” she added.

“If it is left to the college counsellors to search for policy changes, then opportunities are likely to be missed.”

In 2018, the top 10 destination countries for international schools graduates seen all the usual suspects, with one notable exception: Australia in sixth position, after the Netherlands and Spain.

“If it is left to the college counsellors to search for policy changes, then opportunities are likely to be missed”

As for how students choose their destination country, an analysis based on data provided by 179 schools shows that the location of the university, the quality of education and cost are the top three motivating factors.

Visa benefits before and after the degree and ranking of the university come straight after, while employment and career prospect was ranked as the least motivating factor.

“Many college counsellors say that at the stage of selecting a degree and a university, many students are still unclear of the specific career they wish to enter and are encouraged to identify either a university or degree that offers the best support for subject focus instead,” Glass explained. 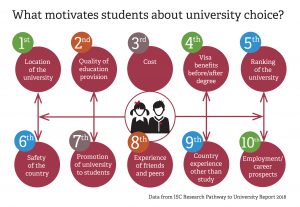