A record number of international graduates of US institutions were authorised to work in the country through the Optional Practical Training program in 2017, but growth has “slowed dramatically” in comparison to recent years according to a Pew Research Center analysis of government data.

An extension of an international student’s visa, OPT allows graduates to work in an area related to their study for a total of 12 months, or longer if they have a STEM degree.

However, the latest Pew analysis of US Immigration and Customs Enforcement data revealed growth has slowed considerably, with an increase of just 8% in international students participating in OPT in 2017 compared to a 34% growth rate in 2016.

This marks the largest decline in annual growth of enrollees since 2004 and follows a long period of rapid expansion for the program in previous years.

OPT enrollment growth was shown to have slowed substantially in 2017 among students from India and China – the program’s two largest countries of origin.

France, Nepal and Nigeria were revealed to be some of the few nations that saw their annual growth rates increase in 2017. 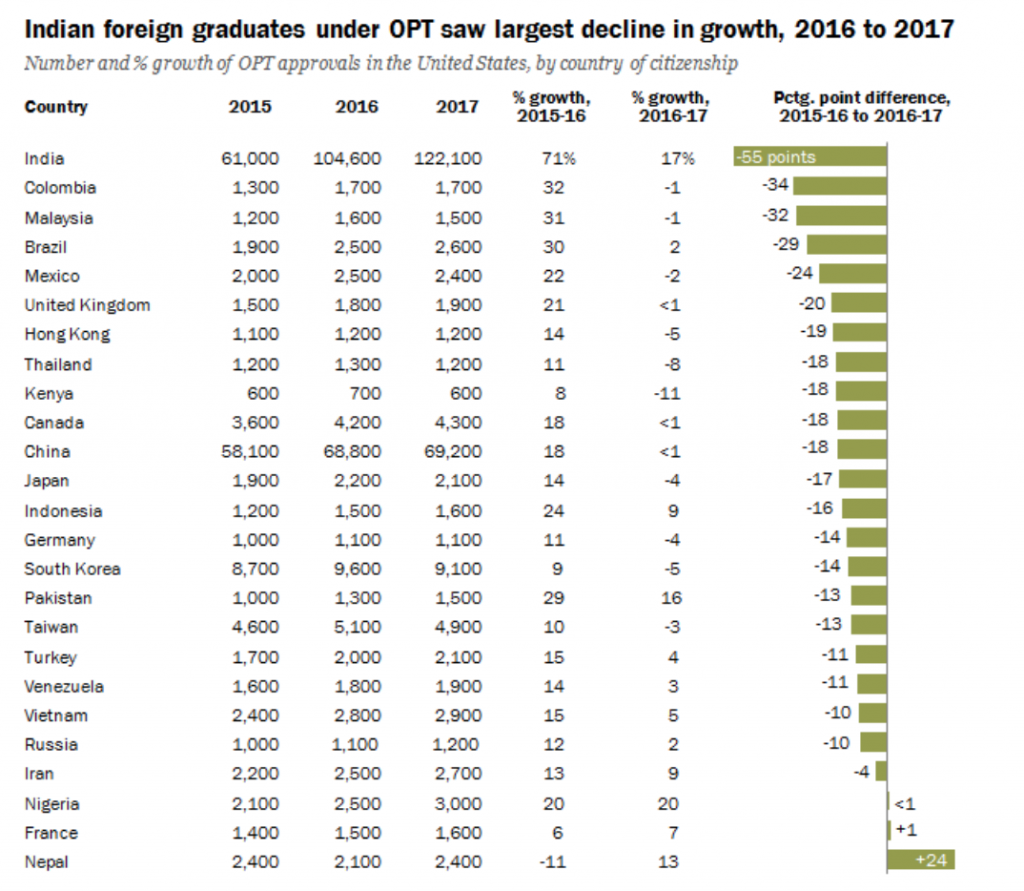 According to the Pew researchers who wrote the analysis, Neil Ruiz and Abby Budiman, declining growth of the OPT program is due in part to a smaller increase last year in the program’s international graduates who majored in STEM fields.

“This slowdown happened despite the maximum length of employment increasing from 12 to 36 months in 2016 for foreign graduates with STEM degrees”.

Although less well-known than the H-1B visa program that enables US companies to hire highly skilled foreign workers, OPT approvals have tended to outnumber initial H-1B visa approvals in recent years and have been a vital lifestream to many US universities.

However, the Trump administration has continued to tighten regulations that govern the OPT program, and plans to introduce a new rule later in 2018 that will overhaul practical training programs in order to “improve protections of US workers” and “reduce fraud and abuse”.

Further limiting the ability of foreign talent to work in the US, a new National Foundation for American Policy report has revealed that the US Citizenship and Immigration Services increased both the Requests for Evidence and denials for H-1B petitions and H-1B visa approvals significantly in the fourth quarter of FY 2017.

“As international students grow to believe working in the United States after graduation is no longer a realistic option, fewer will decide to come to America for their studies,” said Stuart Anderson, executive director National Foundation for American Policy told the PIE.

“The Trump administration would like nothing better than to prevent these talented individuals from working in America,” he added.