Posted on May 22, 2018 by Kerrie Kennedy
Posted in News, Research, under North America.
Tagged with H-1B, OPT, s, STEM, USA.
Bookmark the permalink.

Almost 1.5 million international graduates obtained authorisation to remain and work in the US through the Optional Practical Training program between 2004 and 2016, with nearly three-quarters (74%) coming from Asia, a report by Pew Research Center has revealed.

According to Pew’s analysis of US Immigration and Customs Enforcement data obtained through a Freedom of Information Act request, the OPT program has grown 400% since 2008.

An extension of an international student’s visa, OPT allows graduates to work in an area related to their study for a total of 12 months, or longer if they have a STEM degree.

Author of the report Neil Ruiz told The PIE News that the 400% increase started in 2008, when the number of months STEM degree holders could work in the US under the OPT program increased from 12 to 29, and then to 36 in 2016.

The majority of graduates on OPT programs were revealed to hold citizenship in Asia.

European graduates were the second-largest group (8%) along with students from Latin America and the Caribbean (8%), followed by African students (5%).

Despite being less well-known than the H-1B visa program that enables US companies to hire highly skilled foreign workers and is heavily relied upon by Silicon Valley companies, OPT approvals have outnumbered initial H-1B visa approvals in recent years, the report stated.

Unlike the H-1B visa, however, there is no cap on the number of OPTs available. 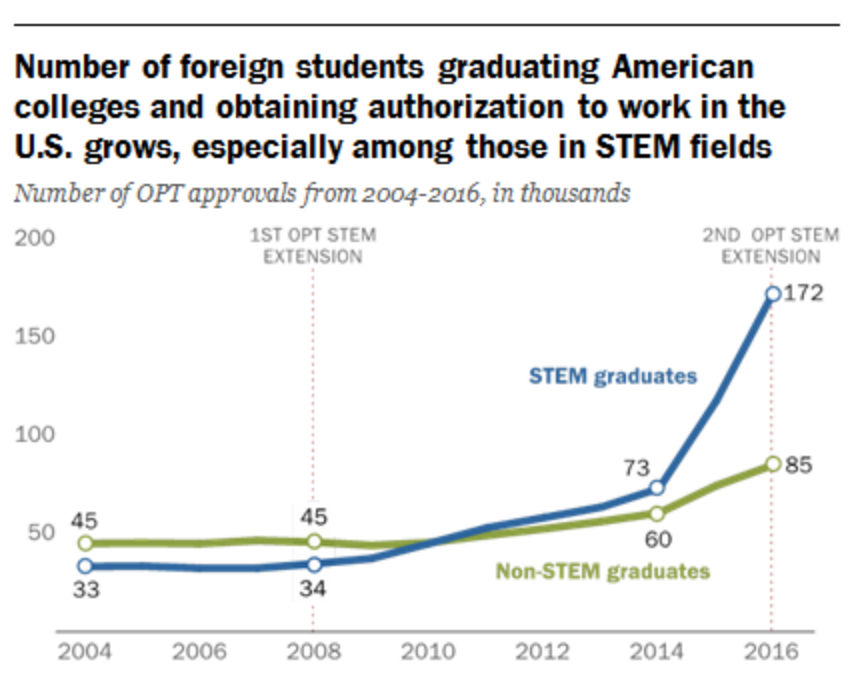 “We’ve seen this huge growth in foreign graduates staying under OPT, and most recently it has surpassed the largest temporary-employment visa program, which is the H-1B,” said Ruiz, adding that the H-1B is “harder to get”.

Graduates from India made up the largest share with 441,400

OPT’s eligible population has also been on the rise: between 2008 and 2016, new college enrollments among international students on F-1 visas (non-immigrant study visas) grew 104%.

Around 56% of international graduates who participated in the OPT were found to have obtained their degree from a public college or university, while four in ten came from private universities and colleges.

“The OPT has grown to become the primary way the US has retained foreign students graduating with STEM degrees from its colleges and universities,” Ruiz added.

“Foreign students obtaining authorisation to remain and work in the US after graduation come from all corners of the globe, and major metro areas in the US tend to attract them in large numbers.”

In 2017, a study by the National Foundation for American Policy warned that any changes to the current STEM OPT program could would be harmful to the US economy.