The Netherlands has overtaken Sweden to be back in pole position as the nation with the most proficient English speakers in the world. It was also in pole position in 2016 and each year sees a jostling of position among Scandinavian countries for the top spot.

But in other regions, results are somewhat sporadic. For example, in Europe, France’s scores have improved for the past two years, but Spain and Italy still lag behind the rest of the EU in terms of average scores.

The scores are achieved through analysing results from 2.3 million adults who took an online English test in 2018 via EF Standard English Test (EF SET). 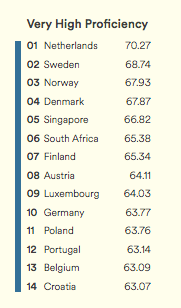 The Netherlands reached 70.27 on the index while the country with the lowest proficiency, Libya, scored just 40.87. Sweden dropped to second place with a score of 68.74.

In Latin America, the region’s two most populous countries, Mexico and Brazil, experienced slight declines in scores. Other Latin American countries, many of which have invested heavily in teacher training in recent years, are at last seeing real improvement, the report notes.

English proficiency in Asia declined slightly compared with last year, with over half the countries surveyed registering a lower score. However China made gains, moving from the ‘low’ band to ‘moderate’ proficiency for the first time.

Authors of the EPI also found a correlation between high English proficiency and various indicators of economic competitiveness, including higher income and increased labor productivity.

This is a network effect, noted co-author, Kate Bell.

And while observing that any ranking can create a feeling of competition, she counselled, “there is not, in fact, a limited supply of English and countries do not need to compete to get it. On the contrary, the more countries (and people) learn English, the more useful English becomes.”

This year saw a 77% increase in test takers since last year. Eight new countries were included in the survey including Bahrain, Ivory Coast, Kenya, Kyrgyzstan, Maldives, Nepal, Paraguay, and Sudan.

Africa’s average proficiency score dropped, primarily due to score changes in South Africa and Ethiopia and to the inclusion of Sudan and Cameroon which both fall in the ‘very low’ proficiency band.

With an EPI average score of 44.60, the Middle East was the region with the lowest English proficiency. This year’s report showed that the Middle East is continuing to fall further behind other regions.

Another key finding of the report was that the English proficiency gender gap is closing. Last year womens’ average English level was higher than mens’ worldwide and in a majority of countries.

But this year women outscored men by less than one point in Africa, Asia and Europe. In Europe, men out performed women in more than half the countries in the region, and by significant margins in Denmark and Romania.

In Latin America, men’s scores were higher than women’s for the first time and in the Middle East, men’s average score continued to outpace women’s by a significant margin.

While that potential has not yet been fully realised, the EPI also found consistent correlations between English proficiency and measures of technology adoption, such as secure servers per capita, information and communication technology (ICT) exports, and broadband subscriptions.

2 Responses to English proficiency is improving overall, but progress is polarised: EF