Whether the rapid expansion of virtual exchange seen during the previous few years will be sustained beyond the pandemic is in question, a new report has suggested.

The Stevens Initiative’s 2022 Survey of the Virtual Exchange Field Report found that of the 155 virtual exchange providers responding to the survey, 147 said that programs occurred in 2021/22.

“The pandemic continues to have a mixed impact on virtual exchange,” the report however noted.

“While it spurred growth from 2020-2021 and served as a catalyst for many providers to either launch or expand virtual programming, it remains to be seen whether this rapid expansion will be sustained and whether providers will continue to invest in virtual exchange.”

The 2021 survey found that 70% of the 173 respondents indicated that they had increased programming as a result of Covid-19.

“An analysis of a subset of 71 providers who responded in both years shows that they have expanded their virtual programming and their participants by 38% and 22%, respectively,” the latest report noted.

“The 2022 survey points to a growing, complex, and evolving field of virtual exchange globally.”

Henry Shepherd, assistant director of the Stevens Initiative, noted that the report sought to provide a foundation of knowledge and create an accurate picture of the field.

“Virtual exchange is practised widely,” he said. “We’ve had tremendous growth [but] now other exchange [opportunities] are restarting.”

With three years of data, it is possible to see longer-term data when compared to the previous iteration of the report. 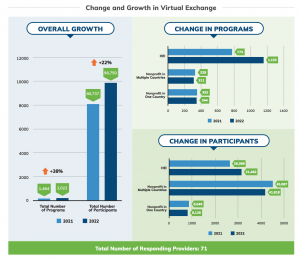 A shifting landscape in virtual exchange is largely a result of the pandemic, the consultant who partnered on the latest report, Rajika Bhandari, said.

“Although we saw fewer providers responding this year, we saw fewer programs reported as well as fewer participants, we also saw growth. Now what I mean by that is, when we’re really trying to measure change and growth, we need to compare apples to apples and really compare the same entities that have responded to more than one survey,” she said, pointing to the 71 providers who responded in multiple years.

“It’s a good news story where we find that the number of programs that the subset of 71 implemented actually increased by 38%. So if we are to consider that sort of consistency over time, we can say that there has been growth in virtual exchange programs.

“Amongst the same subset, because we see a growth in programs, we also saw a 22% growth in the number of participants. So this is very good news.”

Bhandari added that, while the higher education sector made up the largest group of respondents to the survey, “the reality is that where we’ve seen growth, it’s really been in virtual exchange programs provided by colleges and universities”.

Defining and classifying virtual exchange continues to be a challenge, she continued.

“It is not easy because the more global we attempt to be through the survey, the more complex the picture of what constitutes virtual exchange becomes,” she said.