European students are expected to be more rankings-conscious

Navitas research suggests that students in South and South East Asia, sub-Saharan Africa, Latin America and Europe are placing cost and access to post study work rights as the most important factors when choosing study destinations.

However, the survey of some 400 agents worldwide also indicated students in China are still highly influenced by concerns around the pandemic.

Navitas acknowledged that concerns around Covid-19 had fallen from the top influencing factor among students in Greater China in its October 2021 survey, but it remains top of mind, standing at number five in the latest research.

“It remains a much higher concern than most other regions, where Covid-19 impact doesn’t even rate in the top 10,” the research noted, pointing to the zero-Covid policy in China being the “key explanation” for the distinction.

Both international and domestic travel is “significantly constrained”, with quarantine in centralised facilities still required on entry to the country.

“Higher-ranking universities are now being much more accommodating”

In recent days, an example of this was clear when flights and trains out of popular holiday destination, Sanya, were cancelled due to a surge in Covid-19 cases.

Compared to other areas around the world, the return to normality among prospective Chinese students is “slow and gradual”, the report continued, pointing at typical factors such as education quality, ranking and cost rising. But safety and security is still priority number one.

“While they appear unrelated, it wouldn’t be far-fetched to assume a link between the concern over Covid-19 and the importance currently placed on factors relating to ranking and quality,” said Navitas regional sales director for Greater China, Kim Eklund.

“In order to face the risks of travelling and potentially not being able to return home for an extended period of time, a student and their family would want a higher than normal return in terms of quality and prestige.”

Those willing and able to go have a “serendipitous opportunity”, as after the 2020 decline in students, “higher-ranking universities are now being much more accommodating to the reduced candidate pool”, he added.

“This is evident in the extended deadlines and reduced entry requirements being often observed.” 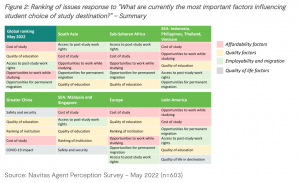 The research also indicated that students in South Asia and sub-Saharan Africa are most sensitive to cost, looking for post-study work rights and migration opportunities. Students in Latin America are in turn placing ability to work while studying as top priority.

“[Students from LATAM] tend to place high value on improving their English-language skills, and having an enjoyable experience while doing so,” Navitas regional sales director for EMEAA Omid Honari noted.

“Many of these students tend to have limited financial support from their families, and must therefore keep an eye on costs, while also working part-time during their studies to pay their way.”

European students are expected to be more rankings-conscious, and there is a “notable pivot” towards quality of education outcomes, he added.

Higher-income tier are countries like Malaysia, Singapore and Brunei share “some commonality” with the Greater China region, placing safety and security and ranking high among influences.

Indonesia, Philippines, Thailand and Vietnam have more in common with South Asia, “where opportunities to work while studying and opportunities for permanent migration feature prominently in the top five factors”, the report noted.

The May 2022 Navitas Agent Perception Survey results “appear as one might expect to have seen in pre-pandemic 2019”, global head of insights and analytics at Navitas, Jon Chew, explained.

Opportunities to work while studying may be one exception in the top five factors list, he added, an influence that may “not have featured as prominently in the past”.

“This could reflect concerns about inflation, weakening foreign exchange rates, and the rising cost of living, as well as the notable uncapping of restrictions on the ability to work during term time in Australia,” he concluded.