International student numbers in France have continued their upward trajectory to reach almost 310,000 in 2015/16. However, the latest statistics from Campus France show that in an increasingly competitive market, France is not keeping up with the rate of global student mobility as incoming student numbers from China and the Middle East fall.

Today, students have a larger number of countries where they can go. It is not only to the States, as it was, or the UK"

The Campus France report, 4,300,000 Étudiants Internationaux, shows international student numbers were up 7% between 2012 and 2015 to 309,642, making France the world’s fourth most popular study destination and the top francophone destination.

“The competition is fiercer and fiercer for everybody. We are less dynamic in the market”

However, the report also shows that other study destinations are stepping up to capture market share.

Writing in the report’s foreword, Campus France’s director general, Béatrice Khaiat, writes that “the gaps are narrowing” between France and its competitors.

“The figures show that France, we’re still growing, but we are growing less quickly than the rate of the general international mobility,” Didier Rayon, deputy head of research & surveys for Campus France, told The PIE News.

“The competition is fiercer and fiercer for everybody. We are less dynamic in the market, that’s something we understand.”

The figures show, as confirmed in an earlier report from Campus France, that more than two-fifths of all international students (43%) studying in France came from Africa in 2015/16.

The EU supplied a further fifth of the total. Student numbers from both North and central America are climbing (up 19.7% and 21.7% respectively), but still each make up less than 3% of France’s international students.

The number of mobile students from the Middle East has more than doubled in 10 years, for example, but France’s share fell by 5.8% between 2010 and 2015.

Similarly, though France has seen an increase in students from Australasia in the last five years of 9.9% (to just over 25,000), this does not reflect the scale of demand for study abroad from this region, where outbound mobility has leapt by 71% in a decade, the report says.

Changes to foreigners’ rights, the policy of one-stop shops and the proliferation of study programmes taught in English and all helping to make France attractive to prospective international students, noted Khaiat.

“There was a spectacular increase Chinese students going abroad and now it is more linear, more stable”

And changing conditions in competitor destinations, including shifting immigration policy, may give a further boost to France in the coming years, she forecasted.

“The current situation can be even more favourable to our country: the announcements made in the United States and the United Kingdom to foreign students could encourage students, parents, and even governments in fellowship programs to reorient their choice to France as a study destination,” Khaiat predicted in the report.

However, Rayon added, the report also shows that: “Institutions need to be aware that they need to highlight – we together, collectively, need to highlight – the benefits of coming and studying in France, taking into account that today, students have a larger number of countries where they can go.”

“It is not only to the States, as it was, or the UK; the scope of where students can go is becoming bigger and bigger.”

In terms of student source countries, France continues to enjoy strong growth in numbers of Moroccan students, who made up its largest contingent of international students, to 36,768 in 2015/16.

However, the figures reveal that the number of students from France’s second largest source market, China, fell slightly for the second year running.

This is despite a raft of measures announced by the French government in 2013 to boost the number of students coming from China, including scholarships. 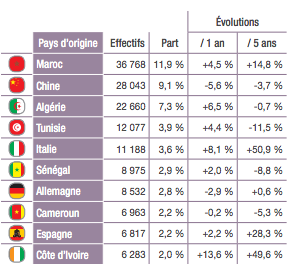 Rayon observed that this may represent a levelling out of Chinese mobility after the unprecedented growth in incoming student numbers seen in study destinations worldwide over the last few years. “There was a spectacular increase in the past [in Chinese students going abroad] and now it is more linear, more stable,” he said.

Algeria came third after China, contributing 22,660 or 7.3% of the total number of international students.

Italy and the Ivory Coast saw the biggest proportional increase in incoming students, both sending around one and a half times as many students to France in 2015 as they did in 2010.

India, meanwhile, did not feature in the top 25 student source markets – showing France has some way to go to meet its target of attracting 10,000 Indian students by 2020.