Admissions departments need extra support to deal with student applications in an unprecedented year – one major factor is that relying on online-delivered English language tests may require additional screening, agreed stakeholders this week.

"It's a lot more resource-intensive"

And while there remains much uncertainty about what the next academic year looks like, many students continue to apply and consider various options open to them.

Speaking as part of a PIE webinar on language testing and shifting student demand, Bobby Mehta, director of UofP Global and chair of BUILA in the UK, explained that testing centres being closed “presented us with a major challenge”.

“We know that as people come closer to their decision point, they’re wavering more and more”

Keen to ensure rigorous standards on entry, Mehta explained that while online tests such as IELTS Indicator had been helpful, they were not widely available in China at present.

“What we’re doing in Portsmouth, is we’re building processes and procedures. So, for example, we may interview students, [offer] additional interviews. We may look at other ways of actually making those assessments and make sure that the results actually match what the student’s actual language is,” he said.

“It’s a lot more resource-intensive. So for this year, the admissions process is going to be tougher and we’re going to have to have a lot more people working behind the scenes to make things happen.”

Andrea Felder at American University in the US also acknowledged a fluid environment and hampered access to usual test options.

“We would also expect [students] to take [IELTS Academic] if they can, once it becomes available again for them to take,” she said.

“Some of it will depend upon timing and application deadline. So, for example, a student who might be applying for one of our early application deadlines… we’re not going to, after we’ve offered admission, require the student necessarily to go back and sit for an Academic [test].”

CEO of IDP Connect, Simon Emmett, joined the panel to share insights from a survey of almost 7,000 students and he explained that virtual events the company has been holding have been very well attended, more popular even than physical events organised for university and college clients.

“We’re seeing, in source markets, a real race to submit applications in many cases,” he counselled.

“I think if you look further ahead at future intakes, there [may be] capacity challenges, but we’re certainly seeing a very strong application demand as covered in the webinar last week” [University of Glasgow and London Met shared similar evidence of strong applications].

Emmett revealed that polling of offer holders revealed a higher proportion of undergrad students happy to start online and transition to face-to-face teaching, compared with postgrad offer holders, who may be more tempted to defer.

But of the 75% of students polled who were offer holders, only 5% no longer intended to commence their studies, he said. 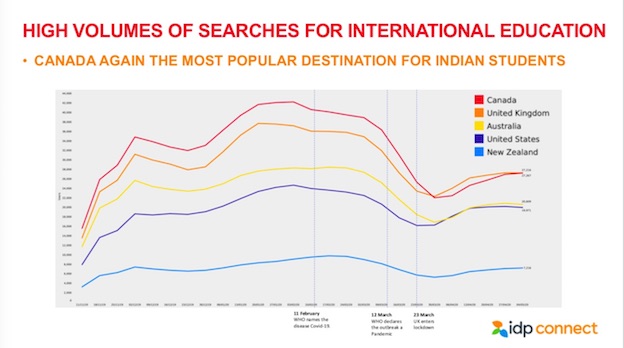 “There is strong demand, but there are clearly trends emerging by destination market,” he said, showing a slide revealing Canada gaining in market share of searches among Indian students; Canada recently confirmed online study would not impact post-study work rights.

Barry O’Sullivan, head of assessment research & development at the British Council, spoke about research also carried out among IELTS test takers. Almost half were undecided or waiting to make a final decision about plans for the 2020 academic year.

“We know that as people come closer to their decision point, they’re wavering more and more,” he said. “So there’s still quite a lot of work that is to be done and that can be done in order to try to help those people make that final decision.”

All panellists agreed that clarity around the details of the education offer is key.

“I would advise anybody that’s looking at studying the UK in the autumn – if you have any doubts, just contact the university and ask them what their plans are,” said Mehta.

“Over the next four to six week period, I would expect to see a lot more information coming out of universities about exactly how they plan to deal with the autumn intake. But it’s very clear that the autumn will be happening.”