Nearly half of parents who took part in a worldwide survey carried out by multinational banking services company HSBC would consider sending their children abroad for university. However while the US topped the poll as the most favoured destination, the UK has dropped down to third place for the first time.

"With an undergraduate’s total cost expected to be around $72,000 on average, the investment is financially significant for parents"

Of the 8,481 parents across 15 countries who took part in the survey, 42% said they would consider an international university education for their child, compared to just 35% of parents in 2016.

The Value of Education report revealed that the US (47%) is the most popular destination, followed by Australia (40%) and the UK (39%), which fell one spot to third.

Despite the surge in international student numbers going to Canada, the country came in fourth place (25%).

Meanwhile, Germany, which recently surpassed its long-term goal of hosting 350,000 international students by 2020, came in fifth with 23%.

Head of Research, Policy and Practice at IIE, Rajika Bhandari, said the fact that these five nations are the most preferred is not a “happy accident”.

“[Germany and Canada] have implemented policies to make it easier for international students to join the skilled workforce, and taken steps toward offering a path to citizenship for highly educated, skill-based immigrants that come through its university system,” she said.

According to the report, “Asian countries are among the most outward-looking” with four of the top five countries where parents are considering a university education abroad being India (62%,), Indonesia (61%), China (59%), and Hong Kong (52%). 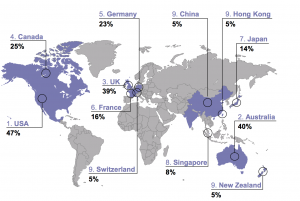 Almost two-thirds of parents (60%) would consider an online degree for their child if it was cheaper than the cost of a traditional campus-based degree.

However, 10% of parents would not consider an online degree even if it was free.

Speaking about the findings, HSBC’s global head of International and Cross-Border, Trista Sun said parents need to plan ahead and look at all the implications of funding international education.

“HSBC’s report shows that the number of parents, especially in Asia and UAE, who are ready to invest in an overseas university education for their child’s skills and employability continues to grow,” she said.

The report also revealed that almost all parents (95%) would consider a university education for their child, with 91% considering postgraduate studies.

More than three-quarters (78%) see completing a postgraduate degree as an important gateway for their child to get into full-time employment in their chosen occupation, with the highest proportions in China (91%), Indonesia (91%) and Mexico (90%).

Recent IIE findings revealed that international students brought $39 billion to the US economy through their spending on tuition, board and living expenses in 2016.

Of parents considering university abroad for their child, 40% of those surveyed say the higher cost to them is a potential barrier.

However, over a third (34%) of parents do not know how much it would cost for their child to study at a university abroad.

Almost all parents (95%) would consider a university education for their child, with 91% considering postgraduate studies

“With an undergraduate’s total cost expected to be around $72,000 on average, the investment is financially significant for parents,” said Sun.

“Additionally, 45% would consider buying a property in their child’s country of study.”

Sun added that with 39% of parents having specific universities abroad in mind for their child, their investment goes beyond financial.

“[Parents] spend a lot of time and energy to help their child build their academic profile and other credentials in order for them to meet the entry requirements at prestigious universities,” she said.

The report is the fourth in a series which “provides authoritative insights into parents’ attitudes and behaviour towards their children’s education around the world”, it states.

2 Responses to 42% of parents would consider study abroad for children, says HSBC report