This summer, Chinese state media announced that of the 400,000 foreign citizens working in China as English language teachers in 2017, an estimated two-thirds were doing so illegally.

English is big business in China, with an estimated 400 million people learning the language. But attracting qualified teachers has proven to be difficult, particularly as Sino-Western relations deteriorate.

China’s strict requirements for teachers severely restrict the demand for ESL teachers being met, despite these requirements having little bearing on the ability of a teacher to do their job.

A sizeable amount of the industry operates in a legal “grey area”, which has created a situation in which potential recruits are leaving themselves open to scams and abuse.

“The recruitment process for hiring teachers from abroad can be challenging and time-consuming,” Celine Qu, a recruiter for Aston English, tells The PIE News.

“They should be from a native English speaking country, have obtained at least have a Bachelor’s degree, a TEFL certification of at least 120 Hours, be between the ages of 21 and 55, be able to obtain a certificate of no criminal record, pass a health check, and get all of their documents authenticated by the Chinese Embassy.”

According to Qu, qualified teachers are “highly sought after”. With over 140 schools across China, Aston English is one of the country’s larger ESL companies. It mainly hires teachers from abroad and then organises their arrival in China, helping them to settle in and employing them in one of the 100+ cities where they have schools.

“When possible we also like to meet teachers in person, but when we can’t, we try to do video-call interviews, and often request a live teaching demo, or video lesson,” Qu adds.

One of the biggest initial hurdles for recruiters is that they are limited to just a handful of countries from which they can source teachers. The government only grants work permits for English teachers to candidates from a “native English-speaking country”.

The government’s Service System for Foreigners Working in China includes over 40 such places on its website. However, most recruiters further limit this to passport holders from just seven countries: the UK, Canada, the US, Australia, New Zealand, South Africa and Ireland.

“Some recruiters scam non-native speakers saying they can get a work visa and have a legal way of teaching in China, which is not true,” David Mitchell from Work and Live in China, a teacher recruiting company, tells The PIE.

Mitchell relates that the company is often approached by teachers who come to China expecting to get a work permit only for the school or agency to then refuse, either because the teacher does not meet the requirements or because the school is not legally permitted to hire foreigners.

In some instances, they are able to liaise with local authorities and find the teacher a legal position, but this is not always the case.

“Initially I think I went on a tourist visa. One of the things I requested beforehand was that I absolutely wanted a work visa. But actually, later I realised I didn’t know any teachers on a work visa,” Harry*, who worked in the country from 2013-2015, explains.

Now a qualified teacher in New Zealand, the company Harry worked for hired him from Canada. Several teachers The PIE spoke to claimed they were hired by British and American recruiters who were just as willing to game the system as their Chinese counterparts.

“They said they couldn’t get a work permit so they offered me a business visa. When we went to convert it, they told me to say I was an investment banker,” Harry recounted.

“Then when the police came to do school inspections they would give all the teachers the day off and take down all of the signs that mentioned teaching or schools.”

The Premium on White Teachers

But while schools are happy to break the law to take on teachers, many will not even consider a black native English teacher. 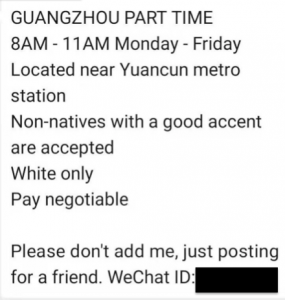 “Most Chinese parents don’t speak English so they judge a teacher’s suitability by how western they look. Many Chinese still think all black people are from Africa and can’t speak English well,” Annette Thompson, who runs a recruitment service eTeach Abroad, explains.

“Instead, schools employ Russian or French teachers and then tell the parents they are American or British.”

There are many many adverts in China specifying a colour requirement in job ads.

Based in Texas, Thompson recruits teachers for schools in China and regularly rejects working with schools because of their racial prejudices or unwillingness to provide work visas.

The imbalance between the number of job vacancies she has and the number of applicants shows just how imbalanced the demand is: Thompson estimates she has five times as many schools looking for teachers as teachers to offer them.

“The ideal teacher is young, white, female and pretty,” she said. 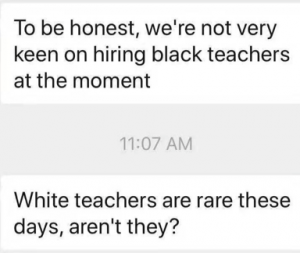 Thompson tries to filter out schools that won’t accept black teachers when deciding who to work with, but many schools are only interested in hiring white teachers.

Salaries and opportunities are also far fewer for those with Asian ancestry, as was the case for one of Thompson’s Asian-American teachers.

“He was really disappointed in the way that Chinese or Asian looking teachers were treated in comparison to Caucasian teachers,” Thompson says.

“They didn’t give him as nice housing and they didn’t pay him as much.”

She also adds that most Asian-Americans withdraw their applications when she warns them about this issue.

“They want to be paid like a Caucasian teacher. But they get about a third to a fourth of the salary,” she says.

Salaries for (white) foreign teachers are usually much higher than the local average. “One of the shitty things about being a foreign teacher is that you will most likely be paid double what your local counterparts earn,” former teacher Colin* tells The PIE.

“This doesn’t cause any resentment or animosity, but it’s morally reprehensible.”

With qualified teachers more likely to take jobs in China’s international schools (which are not open to Chinese citizens), local chains and training centres recruit teachers with little experience beyond a TEFL course. To find teachers, schools market working for them as a gap year experience in the hopes of finding young, Western teachers.

Ads online that promise “low working hours”, “melting pot” cities and “Western apartments” need to be taken with a pinch of salt.

China’s reputation for technology and skyscrapers doesn’t reflect the realities of day-to-day life in its overcrowded cities. “Free Mandarin classes” offered by some schools are rarely more than learning basic phrases from a co-worker and there is little incentive for employers to deliver on end-of-contract bonuses or flight reimbursements.

“Before arriving in China, I assumed it was going to be more like a traditional school,” Benjamin Wolfe tells The PIE – regarding a well-known language chain where he worked for two years.

“I should have asked more questions and done better research, but the majority of teachers who arrive generally have the same surprise. The centre was in a mall, had tiny classrooms and very basic facilities.”

“Staff turnover was very high but I don’t think that language centres care about retention. They know that the majority of their teachers will leave after one year and they’ll replace them with someone else.” 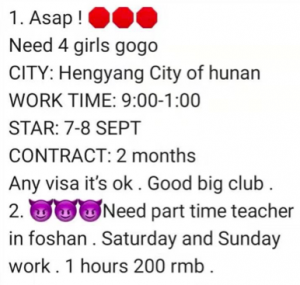 An ad looking for both gogo dancers and part-time teachers in cities 600km apart.

There is now a trend – particularly among training schools – to purchase curriculums more dependent on technology that in part makes up for low retention rates.

In some cases, such as one program The PIE was shown, the teacher was required to do little more than stand in front of the class and press the arrows on an interactive whiteboard. As such, new teachers can have difficulty developing their skills.

“[The school I worked at is] a cash cow and focuses on getting foreign faces that don’t have education-related degrees to re-hash the ill-prepared lesson plans that are given to them,” Colin adds.

“A lot of my peers and colleagues used to show up drunk, hungover, and reeking of cigarettes. You do have some people that try, but those are few and far between.”

“My peers and colleagues used to show up drunk, hungover, and reeking of cigarettes”

The connection between foreigners in China and debauchery has become a favourite topic of Chinese state media.

“In my experience, China doesn’t care about the visa situation so much because they want their children to be educated and learn English,” Mitchell says.

“But because of talk about drugs and prostitution, there’s now this situation where the teachers who come without a work visa are in more danger than they should be.”

Last year, China Daily estimated the value of the ESL market in China at 30 billion RMB ($4.5 billion US), yet China is ranked 47th out of 88 countries in terms of proficiency by EF, a “low” rating.

In June this year the popular China Law Blog run by law firm Harris Bricken published an article entitled “Do NOT teach English in China and Why EVERYONE should read this”, detailing how the law firm is receiving more and more emails from ESL teachers in China seeking help for contract violations, visa issues and payment problems.

“The truth is that many Chinese companies prefer to hire foreigners illegally to legally because doing so can save them a ton of money and is usually pretty low risk — at least for them,” the blog’s author, Dan Harris, wrote.

The penalty for working illegally in China is a fine of up to 20,000RMB, detention up to 15 days and then deportation. Schools are also liable to be fined but in practice, the brunt of the punishment falls on the teachers.

China has always had an uneasy relationship with outsiders, alternating between periods of isolation and opening-up. The influx of teachers, workers and business people from across the world is at the same time welcomed and disliked.

Crackdowns and raids are becoming more common as police try to meet set targets for the numbers of illegal foreign workers they find – often via raids on bars and restaurants with foreign clientele – and rewards are offered to citizens who report them.

The only beneficiaries might be ed-tech. China is its largest market and has taken huge steps to integrate technology into its already underfunded education system.

Some schools now use US-based teachers who teach students remotely, removing the costs and burdens of processing and dealing with foreign teachers and giving schools the option to set their own criteria for staff.

*Several teachers The PIE News spoke to requested their names be changed for this article.