Two language learners from across the globe met online during a start-up competition last year. One had a background in international education and the other in technology and solutions architecture. Together, they brainstormed how to harness the power of technology to advance English proficiency for non-native speakers through a continuous cycle of practice and feedback.

Applying modern voice technology, a speech scoring system, and a vibrant community of language learners, New Voice Learning was born. Moreover, the NVL platform, Flow, was selected as the winner of the start-up competition. And this month, they celebrate their one-year anniversary.

Matthew Sussman, CEO of NVL recently sat down with The PIE News to discuss what led up to this whirlwind year, sharing what he and CTO and co-founder, John Goodman, envision for the future.

“I had very positive associations with cultural exchange at a young age,” Sussman recalls. “When I was in middle school, we welcomed students from Japan, Spain, and other countries to stay in our house [in the US]. It opened up the idea of different cultures and different worlds to me.”

Sussman then travelled on his first exchange program at age 14, to Spain. During college he went to Japan to visit former exchange students who had stayed in his home. So inspired by the peace, tranquillity, and orderliness of Japan, yet not knowing any Japanese, he vowed to return.

“I came back and started as an English teacher in Japan. I only planned to go for a year and ended up spending 25.”

Once relocated to Japan, Sussman worked in study abroad and his command of the Japanese language increased exponentially. However, he never forgot the struggles of language learning.

Sussman was later named the executive director of the Fulbright program in Japan at the same time Caroline Kennedy was appointed the US Ambassador to Japan. “She was the honorary chairwoman of the [Fulbright] board, and her main objective was education. We did many exciting things with her, her team in the embassy, and the Japanese government,” he explains. 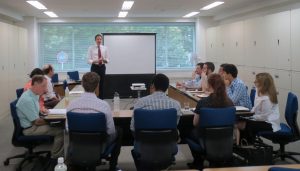 Japanese culture and traditions resonate strongly with Sussman. “There’s an idea in Japan called oyakoko, which means to take care of your parents as you get older. So, the idea of taking care of my parents [in the US] in their golden years, and, before my career ends, maybe trying one more challenge, were overlapping.”

Sussman found an opportunity to participate in a business competition sponsored by a venture capital incubator firm. “My experience in higher education, and [Goodman’s] experience in tech, and the new developments of voice technology in the last 18 months, all converged to create an incredible opportunity to help people improve their English speaking skills.”

Over 3,000 people applied for the funding. When the duo’s Flow platform was announced as the winner, Sussman recalls thinking, “It’s not often you get a chance to go after your dream and make a change in the world, so we decided to go for it. And we relocated, basing our company in San Diego.”

Sussman describes Flow as a platform that uses modern voice technology to help people practice speaking English, targeting the specific components of language in which they need to improve to make rapid development.

“Flow is a web-based app you can access from any device, with 70% of our 5,000 learners from 23 different countries using it on their phones. Many learners are in the developing world.”

“We’re partnering with Fulbright Brazil, to help scholars adjust before coming to the US”

Sussman likens language learning to playing music, requiring multiple components to be engaged simultaneously. “You have to have the right pronunciation, intonation, rhythm, and sounds. All of those things have to line up to sound natural when people to listen to you. And, as in music, that takes practice.”

He also highlights the culture shock that often occurs when studying or working abroad. “We thought, ‘Couldn’t we help people transition a little more smoothly?’ So, we’re partnering with Fulbright Brazil, to help scholars adjust before coming to the US.”

With Flow, everyday experiences are concentrated in the app within micro lessons such as going to the supermarket, the bank, or signing up for a cell phone. “When you know what to say, you’re ready. The stress level decreases and the adjustment process is easier.”

Yet, equity and access to education concerns Sussman. He acknowledges the privilege of living in the developed world and having the opportunity to study and travel abroad. “I have a duty to try to level the playing field to give everybody a shot. What I’m trying to do is provide a voice technology platform for English for anyone in the world who wants to learn.”

Sussman indicates this is the best part of his job. “The exciting part is that we can increase accessibility and equity for millions of people around the world. Speaking English is such a critical skill in our interconnected work environment.”