“There is a danger in getting too vocationally focused, because it’s only going to be useful for an increasingly short amount of time"

Speaking at the annual conference dinner at Parliament House, Birmingham once again reiterated the goals of the upcoming national strategy for international education to “target opportunity for Australia in the borderless space… [and] ensure Australia is a partner of choice for research and investment across the education spectrum” as well as attracting even greater international student numbers.

“Australian universities are very highly regarded globally,” he said. “We see that people vote with their feet when they’re coming here.

“We are aware that, apart from contributing to the vibrancy of our campuses, the participation of international students also contributes to growth in other sectors of the Australian economy, and fosters relationships that in turn will enhance global collaboration that perfectly complements the Turnbull government’s innovation vision.”

The new strategy aligns with the National Innovation and Science Agenda, Birmingham said, which was announced last year and includes a A$1.1bn government investment to “incentivise innovation and entrepreneurship, reward risk taking, and promote science, maths and computing”.

Both strategies have the backing of an all-of-government approach and are “part of a suite of Turnbull initiatives to strengthen and grow international education”, he added, along with reforms to the ESOS Act, a new simplified visa framework, and a global alumni engagement strategy. 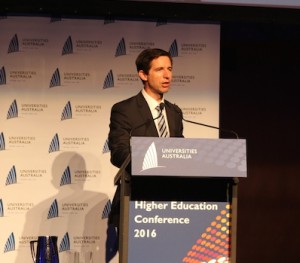 The NISA was widely discussed at the conference, and international research collaboration is “an incredibly important part of the next phase of Australia’s international education outreach”, UA chair, Barney Glover, in his address at the National Press Club.

“It can’t simply be about attracting inbound international student numbers, we’re beyond that; it’s very much a bilateral, multilateral set of relationships,” he added.

Responding to a question from The PIE News about the role of international partnerships in research innovation, he added that “There is no way that we can build the sort of innovation future we want for Australia if we try and do it in isolation of research linkages internationally.”

Fostering closer links between industry and higher education will be crucial in the coming years, educators and industry representatives at the conference agreed, as the sector debated how best to promote research excellence and prepare graduates for the dynamically changing jobs market.

This should be a matter of considerable concern to universities, given that many businesses leaders believe that higher education fails to adequately prepare graduates for the workforce, argued Simon Eassom, global manager for education solutions at IBM.

Involving industry leaders in curriculum development, a greater emphasis on work experience and providing space for entrepreneurship were all suggested as ways to address this gap.

Doron Ben-Meir, CEO of UoM Commercial, the commercial engagement services subsidiary of the University of Melbourne and executive director, research, innovation and commercialisation at the university, predicted that “in the future, we will see the half life of careers reduce”.

“There is a danger in getting too vocationally focused, because it’s only going to be useful for an increasingly short amount of time,” he contended, adding: “The imperatives that we should apply to ourselves are flexibility and the capacity to self-train.”

Tanya Monro, deputy vice chancellor research and innovation at the University of South Australia, echoed that innovation is “about problem solving and inherently interdisciplinary”.

She said that industry should be present on university campuses, arguing that “one of the most positive things we can do to address the gap between higher education and industry is co-location”.

Keynote speaker Jo Ritzen, economist and former president of Maastricht University, noted that it is easier for universities under 50 years old to innovate, underlining the resounding message coming both from the academic and industry side: that institutions must avoid being immobilised by inertia.

Ultimately, he argued that innovation strategies at universities must be student-focused, noting that innovation is “not just about technology” but about encouraging risk-taking and value add of graduate competencies.