“Unequivocally good news” was the reaction of the Confederation of British Industry’s education and skills policy team to the news that post-study work rights for international students were being ushered back in, and it was a sentiment shared by countless stakeholders.

The question being asked the loudest, however, was from current international students in the country

“Improving the UK’s post-study work offer will make us an even more attractive destination for global talent – benefiting both universities and businesses alike,” tweeted the CBI’s education team.

The announcement initially buried in a wider statement about the extension of a genome research project – a £200m investment into stem research – then also appeared as another press statement on the UK government website from the British High Commission in Delhi. 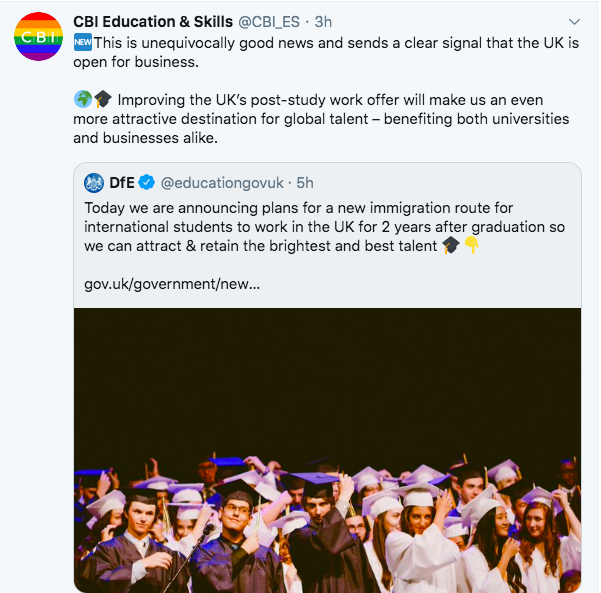 Delhi focused in on the opportunities for Indian students, while the UK Home Office also tweeted a video to announce the news.

“This is fantastic news for Indian students, who will now be able to spend more time in the UK after completing their degree, allowing them to gain further skills and experience,” commented Dominic Asquith, British High commissioner to India.

A new graduate immigration route will allow international students to stay in the UK for two years after they graduate to work, or look for work, ensuring the UK continues to attract the best and brightest. pic.twitter.com/L8k7W1A0x2

Many of those who have campaigned hard for the UK to shift its policy settings meanwhile were ecstatic about the announcement. 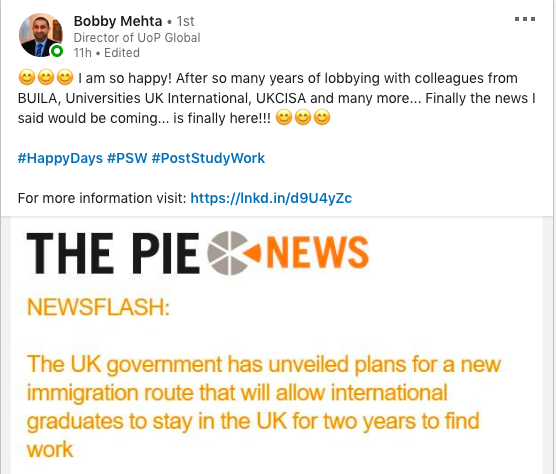 “I am so happy!,” wrote Bobby Mehta, chair of the British Universities International Liaison Association which had campaigned alongside fellow organisations for this.

“After so many years of lobbying with colleagues from BUILA, Universities UK International, UKCISA and many more… Finally the news I said would be coming… is finally here!!”

Ruth Arnold, one of the architects of the award-winning #Weareinternational campaign, tweeted, “Opportunity now for students themselves to come together with government, providers and representatives and employers to develop a truly positive International Education Strategy no longer hindered by unnecessary baggage. Open and welcoming. #WeAreInternational.”

“This is a big win for international students”

MPs reacted to the news, with many also endorsing the move. “Great policy. Right Britain should be open to top talent,” tweeted new minister for women & equalities, Liz Truss.

The question already being asked loudly on social media, however, was from current international students about how the new policy might impact them.

“Universities will be able to recruit on the basis that students of 2020/2021 will benefit,” is the government line, so how this message is managed will be perhaps the first challenge for UK stakeholders, as the news sinks in.

Simon Marginson, director of the Centre for Global Higher Education, commented, “This is a big win for international students and for the education export sector in the UK.

“It recognises that international graduates have a right to internships and other post-study course-related experiences. It also recognises that education and immigration can overlap and this is not a bad thing.”

However, he counselled that “we should keep the decision in proportion”.

“The new two-year PSWV regime conforms to international norms. It is not especially generous,” he observed, pointing to the relatively high cost and slow processing of student visa applications in the UK as well as wider political context in which Britain was being viewed as other issues to consider.

Nonetheless, the sector embraced the news, some “good news” for once, as some observed on social media, with “game changing” potential for the future. 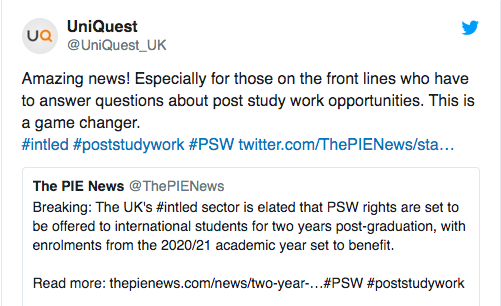