A total of 20,774 sponsored study visa grants were made to EEA and Swiss students in the first three quarters of the year

The figure – including both main applicants and their dependants – broke the previous record set at the end of June 2010 when 307,394 visas were granted. 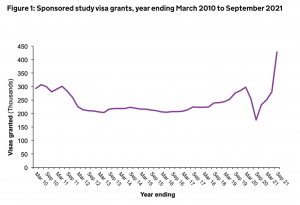 The government said possible explanations for the “dramatic increase” included students deferring the start of their courses last year, beginning via distance learning and not requiring visas in 2020, in addition to immigration rule changes affecting EU students.

“This could be combined with a further general trend of growth in international students applying for visas to study, as from 2017 until the pandemic there was a strong annual growth in student visas, averaging at approximately 10% per annum over the period,” it said.

The data showed that following changes in the immigration rules from January 1, 2021, a total of 20,774 sponsored study visa grants were made to EEA and Swiss students in the first three quarters of the year. This represented 6% of grants for the period.

“It is simply fantastic to see such a strong percentage increase in the number of student visas granted over the past year,” director of Universities UK International Vivienne Stern said in a statement.

“In the face of unprecedented challenges, UK universities have not only pulled through, but delivered a truly welcoming and high-quality experience for students around the world. Supported by flexible, understanding, and competitive policies from UK government, this has been an extraordinary period for the UK’s international student recruitment.

“I hope we can take this collaborative spirit forward as we address existing challenges and opportunities in the recruitment space.”

The sponsorship summary shows that in the year ending September 2021, non-Russell Group institutions had 179,176 applicants for Certificates of Acceptance for Study, compared with 107,638 for the full 2019 year. Likewise, Russell Group universities 145,947 applicants for visas, up from 214,594 in 2019.