What do students value most in a language learning experience? Interacting with their host family, fellow students and teacher, according to a survey of 2,000 former language learners.

"Tutorials on YouTube are often in English and not in German"

When asked what helped them improve their language skill the most, 90% of respondents to global language provider Sprachcaffe’s Language Learning Sustainability Project said it was face-to-face interaction with other people.

Over half said they are more confident speaking the language thanks to the experience of learning abroad while 20% said it helped them travel more and 13% said it contributed to a change in their work life.

“Our product [study travel] is unique because it’s learning and travel. When it comes to language learning you can do it online quick and easy but if you want something more valuable you have language learning trips,” said Pauline Pitte, the study’s co-author.

Taken over six months in 2016, the survey attracted former students from all over the world who had been on a language course abroad within the last five to 10 years. The project aims to show the long-term impacts of language learning abroad, said Pitte.

“We don’t want to make this about online versus in-class learning, we just wanted to explore the package students get when they go on language exchanges. Is it efficient for everyone?”. 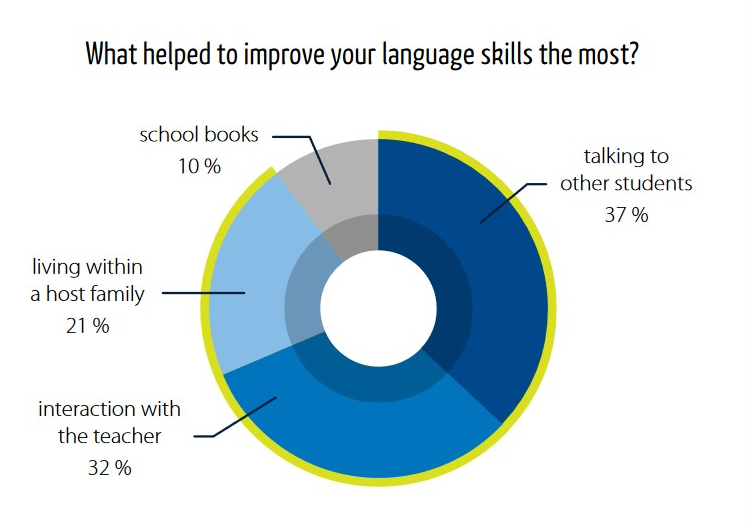 According to responses, professional and academic drivers were the reasons why 62% of the students said they chose to take a language course abroad, while 38% said it was for leisure activities like international travel.

The survey also showed that some 72% of the students used the language on a regular basis – for 44% it’s daily while 28% said they use it weekly.

Overwhelmingly, most survey respondents had travelled to study English (62%) while German and Spanish courses attracted 10% each. As a result of the their new language skills, 30% said they could now watch videos and movies in the native language.

“TV series and films often lose a lot of their wit through translation,” said Ina, a German travel blogger who started the site Genussbummler. “But tutorials on YouTube are also often in English and not in German… without English I would not be able to solve my technical problems.”

The impact language learning has on people’s personal lives is also evident in the survey results. Students reported making strong personal connections with their fellow students while studying a language abroad, with 60% of respondents saying they keep in touch with people they met on their trip.

Learning a language abroad can also lead to lifelong romance, the study shows. In an interview, a German and Brazilian couple who met while studying Spanish in Malaga and are now married said: “Learning a new language and orienting ourselves with a new and completely different environment, and also having fun while doing so, had positive effects on our self-confidence.”

The majority of students (68%) said they went on their language learning trips before they turned 30 which suggests they were more open to life changes, the study says.

“Not only does it connect unused synapses in the brain and open up new horizons, but it also uncovers opportunities you never thought about before: whether professional, academic, romantic or destined… no aspect will stay the same!”