More than three-quarters of UK business leaders believe fluency in Mandarin Chinese will give school leavers a career advantage, with more than a quarter saying it would be ‘significant’, according to a survey commissioned by the Mandarin Excellence Programme.

The MEP, which is delivered by the UCL Institute of Education in partnership with the British Council, is an intensive language program that was introduced in 2016 to increase the number of young people with Mandarin language skills.

Out of 1,154 senior decision makers surveyed in February 2018, 77% said that speaking a high level of Mandarin would be beneficial to school pupils in their future careers.

Of the total respondents, 28% said the advantage to school leavers would be ‘significant’, with this percentage rising to 31% amongst those working for companies with an annual turnover of £10 million or more.

The survey also found that 69% felt that Mandarin Chinese skills – particularly conversational – would be important for UK businesses and the economy in future, although 66% said that it is currently difficult to recruit fluent speakers from within the UK workforce.

Respondents came from a variety of sectors including manufacturing, construction, medical and finance, and a mix of small, medium and large organisations across the country. 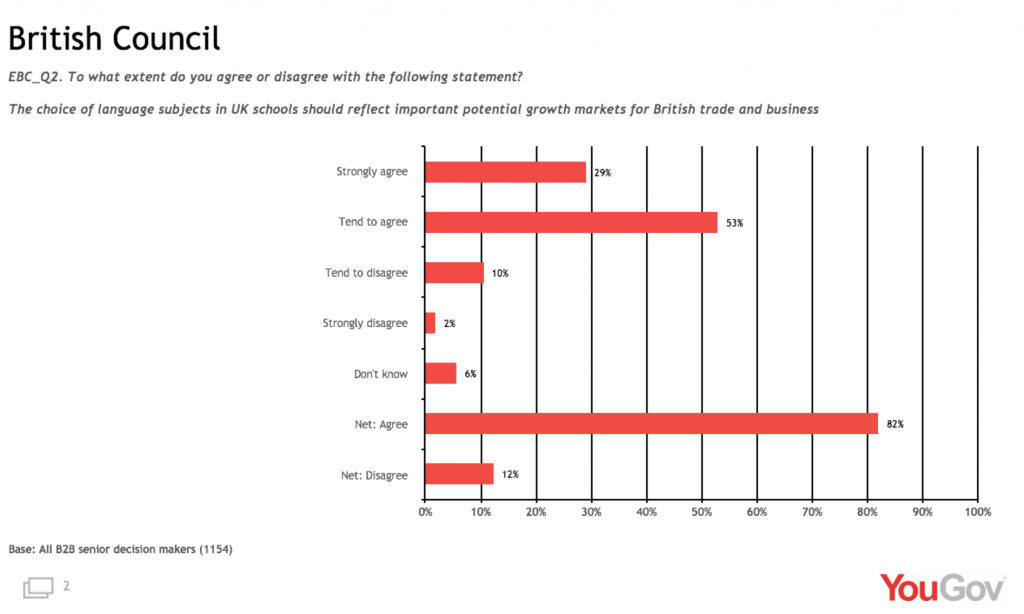 Commenting on the findings, UK schools minister Nick Gibb said young people who are fluent in Mandarin will be at an advantage when competing for jobs with their peers from around the world.

“Education standards are rising… but we must do more to ensure our education system is fit for the future demands of a modern economy,” Gibb said.

“That is why we introduced the Mandarin Excellence Programme, which is on track to have 5,000 pupils fluent in Mandarin by 2020.

“The enthusiasm and energy that both pupils and teachers are committing to this program is inspiring, and will help Britain to compete in an increasingly global economy.”

Official figures from the Joint Council for Qualifications highlight a 7.3% drop in the number of pupils in England, Wales and Northern Ireland taking GCSE language exams in 2017.

A total of 4,104 students took Mandarin Chinese at GCSE level in the UK, as compared with 130,509 who took French.

However, head of Schools Programmes at the British Council Mark Herbert told The PIE News that Mandarin is becoming an increasingly popular language to learn.

“By the time these children complete the program, they will be approaching fluency”

“Academically, Mandarin is really interesting because it provides access to the culture and history of China,” Herbert said.

“Mandarin is a key language that [businesses] are looking for in their workforce in the future, so children who have fluency automatically have a leg up in their CV and have a career advantage.

Herbert said that because the MEP is an intensive program that requires hard work and dedication, extra funding is provided to the schools that deliver it.

“It’s intense, but the pupils have an opportunity to progress much more rapidly than with traditional European languages such as Spanish, French or German. By the time these children complete the program, they will be approaching fluency,” he said.

Director of the UCL Institute of Education Confucius Institute Katharine Carruthers added that MEP pupils, their parents and UK businesses should be encouraged by the success of the program.

“Employers can feel reassured that there are young people coming through the school system who can meet business needs when it comes to communicating with one of the UK’s largest trading partners,” she added.