Visa delays are hampering efforts to increase international education opportunities for both outbound US students and inbound exchange students, delegates heard at NAFSA 2022 in Denver.

However, there are various initiatives aimed at helping the sector recover following the pandemic and allies in US government are assisting in a “move in the right direction”. But stakeholders also want more funding for US exchange programs.

For inbound J1 visas, there is “lots of frustration”, executive director of the Alliance for International Exchange Ilir Zherka noted.

“Visa delays are among the most disruptive problems sponsors are facing right now,” the Alliance told The PIE. “Many US embassy locations are experiencing an especially high demand for exchange visas like in pre-pandemic years.”

Increased resources at particular times of the year would be beneficial, he suggested.

“We are approaching the end of the busiest window for processing BridgeUSA Summer Work Travel and Camp Counselor visa applications for the Summer season,” the Alliance noted.

Sponsors are also busy preparing for BridgeUSA high school programs beginning in the Fall, and for recruiting Au Pair, as well as Intern, Teacher, and Trainee program participants.

“Capacity limitations create an environment where appointments are delayed or cancelled suddenly, or are unavailable for long stretches of time. This is a major problem because many of these programs are seasonal or are tied to the academic year. That means that the window for reviewing and granting visa applications is often very narrow.”

The bipartisan House letter published in May highlights the “importance of the programs and urges the prioritisation of BridgeUSA J-1 visas”, the organisation noted.

“Modernising the approach to visa processing for exchange visitors would help ease burdens on sponsors,” it continued.

An increase in visa interview waivers – which the Department of State embraced during the pandemic for exchange applicants who had received a visa in the last 48 months – would also “help programs to rebuild”.

“Additionally, allowing the electronic transmission and signature on DS-2019 forms would ease burdens on sponsors. The requirement to manually sign and ship forms leads to unnecessary expenses and delays. We support Educational and Cultural Affairs’s efforts to make this change, hopefully, in the near future.”

Challenges to visa processing revolve around limited interview appointments at some consulates, out of date DOS and embassy websites and increased visa denial rates at various posts.

NAFSA has been working to boost visa processing at Spanish consulates in the US for American students seeking visas, the organisation’s deputy executive director of Public Policy, Jill Allen Murray, said. Additionally, access to UK visas continues to be a challenge. The PIE recently reported that this was an issue, with the Home Office saying that application under the Ukraine Family Scheme and Homes for Ukraine were being prioritised over study, work and family visa applications.

However, the US is in a better position now than under the previous administration, speakers suggested. 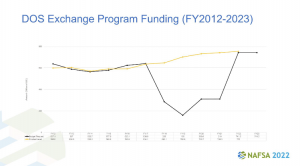 For the 2023 year, the State Department’s request for ECA is $741.3 million, level with the FY 2022 request. Zherka warned that the $11.7m drop in funding could have a detrimental impact on the Fulbright and Gilman Programs.

“The Biden administration made this request for FY23 funding before Congress appropriated additional funds for FY22, so it is unclear whether the administration intended to request a cut,” the Alliance told The PIE. “It is important, in our view, for Congress to provide more funding so that we can incorporate more online programming, reach wider audiences, and address increasing threats to democracy around the world.”

The Alliance for International Exchange and NAFSA have appealed to both the House and the Senate to appropriate $1.1 billion or the “highest possible funding level” in the 2023 fiscal year for educational and cultural exchange programs.

The $1.1bn proposal would support over 430 EducationUSA Advising Centers worldwide, which facilitates international students from 180 countries coming to the US, in addition to backing the 8,000 Americans studying languages critical to US national security, such as Arabic, Chinese, Persian, and Russian.

“We are still waiting for the administration to match that boldness,” Zherka told the NAFSA audience.

“We are still waiting for the administration to match that boldness”

“At a time when exchange programs are in the process of rebuilding, the increase in the budget for the US Department of State’s Bureau of ECA is especially important,” a spokesperson for the Alliance added.

Carl Herrin, chief of staff at Worcester State University, noted that many are anticipating the results of the midterm elections on November 8, and its impact on international education.

“We can anticipate changes [but we need to] know who has control of the House and who is going to control the Senate.” The biggest guaranteed change is in the Senate appropriations committee, he noted.

NAFSA has said that as part of the $1.1bn, EducationUSA should see an increase of $37m in funding to reach at least $50m. That would help restore, and also further grow and diversify, international student enrolment post pandemic, it said.

The proposal for the for this year Fulbright Hays programs ($13.8m from the House and $10.8m from the Senate) is also too low. Some $20m should be allocated for the next fiscal year, NAFSA noted earlier this year.

Following a 46% decline in new international student enrolments in the US in 2020, there are however “some real important glimmers of hope in terms of the future of the field and us regaining our footing in terms of enrolments”, Allen Murray added.

“We know that there are opportunities… We are moving in the right direction, but we also have really important allies in government and in coalition that are working to enhance international education and I think we are at an important moment in time to have all these things come together.”

UCLA’s vice provost for international studies and global engagement, Cindy Fan, sang the praises of the 2021 joint statement on international education. The statement acknowledges that global challenges require “partnership and collaboration across borders” in order to be resolved.

“[This] is exactly what we want to achieve in international education, and that is connecting across borders,” she said.

Director of the State Department’s Office of Global Educational Programs Anthony Koliha noted at the conference that the wider agencies within the Department of State are “working to solve problems”.

“Under the water there are a lot of feet paddling”

While they have to work within frameworks, rules, regulations and laws that they are given, they “very much want to solve problems and move things forward”.

“We don’t always move as quickly as you’d like. It’s not always transparent, we can’t share all of the internal conversations… we are balancing issues – the safety and security of Americans, the safety and security of folks coming to the United States, national security issues, economic competitiveness issues, all of these types of things, in support of and through things like international education.

“At least one of our sister agencies has a pretty exciting announcement hopefully coming out shortly… There is a lot going on. Under the water there are a lot of feet paddling.”