Rutgers University and the University of Tel Aviv have signed a new agreement to establish a presence by TAU at the proposed New Jersey Innovation and Technology Hub.

The US institution signed a memorandum of understanding with its Israeli counterpart in Tel Aviv that will further strengthen their partnership, which was also attended virtually by the governor of New Jersey Phil Murphy.

The agreement will see Tel Aviv collaborate with Rutgers at the facility in New Jersey, which will be home to a new translational research facility and the Rutgers Robert Wood Johnson Medical School.

Rutgers president Jonathan Holloway reiterated the importance of going to Tel Aviv to sign the agreement.

“I went in person because this is an important initiative that reflects Rutgers’ commitment to excellence and our recognition that there is no limit to the power of partnerships,” Holloway said upon the signing. 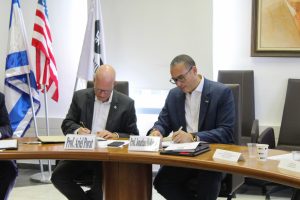 The MOU will also help establish a new grant program, which will seed what they hope to be “enduring collaborations across disciplines” between the two institutions.

The aim of the program is to provide seed funding for up to five collaborative research projects, on which there will be a principal investigator from both Rutgers and TAU.

“TAU and Rutgers will share the strategic goals of enhancing research through global collaboration and of strengthening the ties between academia and industry,” said TAU president Ariel Porat.

The investigators will in turn be selected by a selection committee consisting of members from each institution, including Rutgers senior VP for research Michael E. Zwick and TAU VP for research and development Dan Peer.

It follows the beginning of the partnership in 2020, and the universities have previously collaborated on projects such as a monthly series of joint scientific symposia with topics including the pandemic, drug discovery, nanomaterials and cybersecurity.

Choose New Jersey, a non-profit helping companies and corporations expand into New Jersey, organised a New Jersey business delegation to Israel in 2020, which is where the partnership between the institutions began.