“We all knew how hard ELT has been hit by this, but it is shocking to see the proof”

However, a second report, ‘Impact of Covid-19 on the English language teaching sector in the UK’, researched six months later, shows student numbers down by 82% and a loss of half a billion pounds.

“Last year, the UK not only strengthened its position as the most popular place to study English in the world, it was one of a very few destinations which experienced an increase in student numbers in 2019,” said Patrik Pavlacic, head of Research at Bonard.

With continued travel restrictions in place and with confidence in the UK as a study destination taking a hit due to its handling of the pandemic, the crisis has hampered the growth which the UK was forecast to enjoy in 2020.

In 2019, English UK member centres taught 508,614 English language students, a 1% increase over 2018 in a trend which has been continuing since a strong market rebound in 2017, according to the impact report.

As the ramifications of the Covid-19 crisis only became clear in February 2020, the first quarter of the year was the least affected.

“That said, UK ELT providers still saw a cumulative decline of 28% in student weeks, highlighting the early impact of Covid-19 on the sector,” explained the impact report. 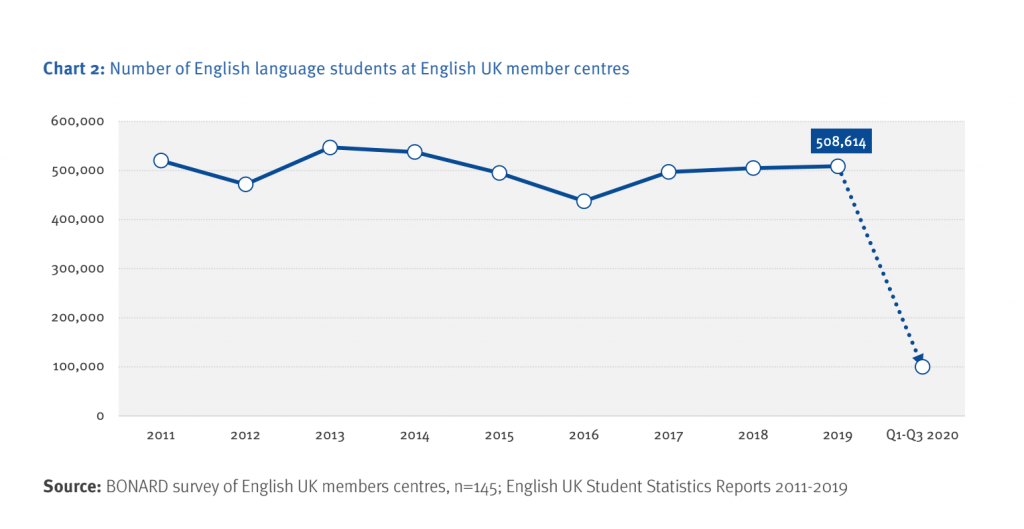 The report also shows a lack of confidence in a swift recovery: 52% of respondents expected no recovery at all this year.

According to members surveyed, the drop in numbers will translate into a direct loss in revenue of £257 million, representing the estimated total loss in their revenue for the Q1- Q3 2020 period as a direct result of the impact of Covid-19.

“Taking into account that responding centres represented 41% of all student weeks generated, it can be estimated that the economic loss for all English UK members will exceed £510 million for the first three quarters of 2020,” the report continued.

Jodie Gray, interim chief executive of English UK, said the figures confirmed what those in the industry had feared.

“We all knew how hard ELT has been hit by this, but it is shocking to see the proof.

“We needed to be able to show the extent of the damage in order to make our case to government that we need support now, not only with rates relief and extended furlough, but with support for our marketing and also helpful immigration policies.”

“But as we work together to rebuild UK English language teaching after the Covid-19 crisis, rigorous, granular statistical information and analysis is essential to inform and support everything we do.”

The 2020 student statistics report shows the UK welcomed 1% more students last year than in 2018, despite a slight decline in the number of English UK members.

Juniors numbers rose to 54%, and a quarter of all weeks were spent in London

With 260,043 student weeks, Italy remained the UK’s most represented market in 2019. Next were China (234,066) and Saudi Arabia (194,833), highlighting the increasing contribution of non-EU countries to the overall student week figure.

Juniors numbers rose to 54%, and a quarter of all weeks were spent in London.

In an introduction to the student statistics report, Bonard CEO, Samuel Vetrak, said that the rebound we saw in 2017 appears to have laid the foundation for incremental increases in student numbers in the years to come.

“Since then, the UK has proven its attractiveness as a study destination as well as its readiness in terms of capacity to host a growing number of English language learners, fuelled by the junior segment in particular,” he said.

At the same time, Vetrak continued, the decreasing length of stay poses a systematic challenge to the future of UK ELT.

“Private sector members are increasingly exposed to students’ preference for programs with a shorter course duration, finding themselves caught up in a debate with customers to justify the time spent in an immersive environment and the essential added value it offers.

“Meanwhile, the state sector, where student motivation tends to be more related to academic achievement, is enjoying a more favourable trend in this regard,” he added.

To receive The PIE Weekly with our top stories and insights, plus a special PIE ONE GET ONE FREE offer on tickets to our next virtual conference The PIE Live (offer ends 28 Feb), please