Posted on Feb 3, 2017 by Amy Baker
Posted in Associations, News, under North America.
Tagged with NAFSA, TrumpBan, US.
Bookmark the permalink.

NAFSA has introduced a new logo and strapline, replacing “Association of International Educators” with “Connecting People. Changing the World.” The new-look launched in February and has been very well received, says the US association.

"We firmly believe that by connecting people through international education, we can truly change the world"

The bold new statement will be NAFSA’s new organisational brand after the 10,000-member strong association conducted a brand discovery process. “Our brand update celebrates the values that are at the forefront of our mission,” said Esther Brimmer, its executive director and CEO.

Noting core values of inclusivity, diversity and intercultural understanding, she continued, “It allows us to lead with a renewed dedication to promoting positive change, bridging cultural divides and establishing connections, not borders.”

The new brand positioning comes shortly after NAFSA issued a statement on President Trump’s executive action, issuing a 90-day ban on all visitors from seven mainly Muslim countries. Brimmer called the action “inconceivable”, adding: “This particular action took us away from policies, which in the past, have made our nation safe and strong.

“Thoughtful policies and not those that are capricious and unpredictable have kept our country growing and thriving economically and educationally.”

NAFSA is keen to ensure that its nearly 70 year tenure as an organisation focused on achieving progress and peace via international exchange is clearly articulated. 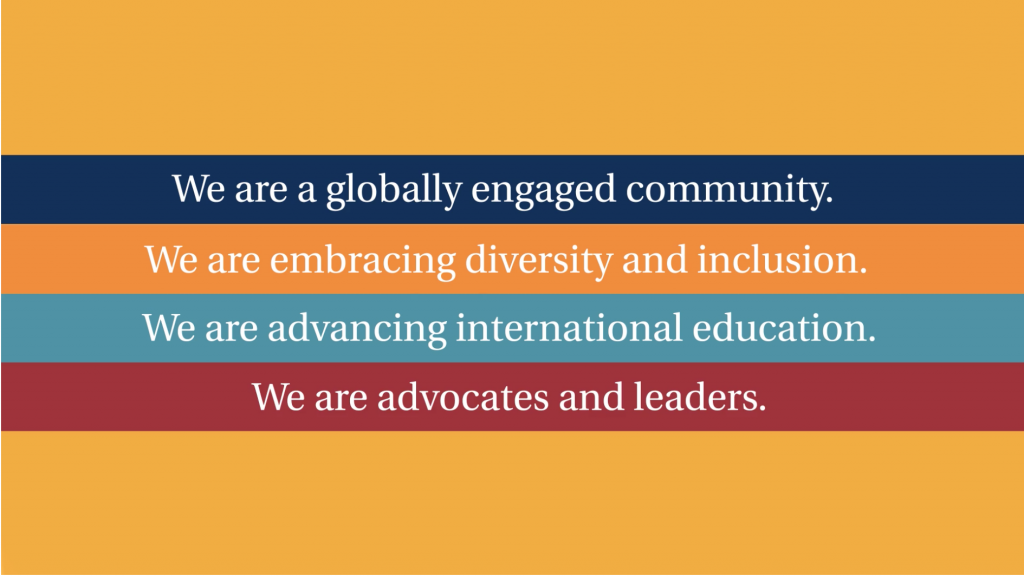 “We firmly believe that by connecting people through international education, we can truly change the world. Our new brand is an expression of this belief,” stated Brimmer, who took over as CEO in January.

NAFSA’s senior director of marketing, James Mahoney, told The PIE News that the organisation will continue to conduct business as NAFSA: Association of International Educators. “However, with respect to a brand moniker, the phrase will not be a part of the graphical lock-up.”

“The response from our membership has been overwhelmingly positive,” he added. “Our members and international education community participated in a comprehensive brand discovery process to help us develop a new brand that conveys our values and aspirations.”