Posted on Nov 16, 2018 by Viggo Stacey
Posted in News, under Global.
Tagged with International Quant Championship, Moscow Institute of Physics and Technology, Singapore.
Bookmark the permalink.

A group of students from the Moscow Institute of Physics and Technology fought off competition from 11,000 participants from across more than 80 countries to claim victory in the inaugural International Quant Championship.

After completing their bachelor's at MIPT, the three graduates relocated to France.

The stages culminated in the finals held in Singapore where the Russian team was crowned champions over 47 finalists from 15 countries.

Due to an issue obtaining a visa, Shpakova could not travel to Singapore with her teammates, who are all now based in France. Nonetheless, she supported her colleagues throughout the final via Skype.

When arriving in the East Asian country, the team was third overall, behind a team from Vietnam and another from China. 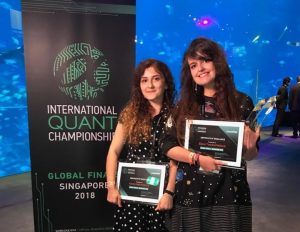 Elena Tverdokhlebova and Karina Ashurbekova at the event in Singapore.

“In Singapore the goal was to create the best portfolio based on the strategies we had already created. We had three hours to do it. We had an interesting approach based on Karina’s PGC studies,” Elena Tverdokhlebova noted.

“The most valuable profit of this competition was actually that we studied new things and learned a lot about financial markets. We now have several job offers. We have visibility as well,” Tverdokhlebova explained.

“At the beginning we considered this competition a good chance to learn something new, learn more about this field because it was a new field for everyone is our team,” Ashurbekova highlighted.

The opportunity to travel to Singapore attracted the team too, Tverdokhlebova added.

After completing their bachelor’s at MIPT, the three graduates relocated to France, where Tverdokhlebova finished her master’s, and is now working as a data scientist. Ashurbekova is completing a PhD at Université Grenoble Alpes, while Shpakova is study hers at Inria and Ecole normale supérieure.

“All our classmates from the university, they are all now all over the world. Every town you go for your vacation; you meet your old friends. I don’t know why it’s so common,” Shpakova told The PIE News.

“It’s better to travel to get some experience abroad and then come back home and apply it somehow,” she added.

“I saw a lot of scientists that came back to Moscow and grow universities or labs. Regardless of academia, the connections are very important. It’s very important to have collaborators and connections in the academia world. I think my French background will help me a lot.”

The team has already started participating in a new competition, as the saying goes, if it ain’t broke, don’t fix it.

“Since we all have slightly different backgrounds it helped a lot, I think it was a good combo and a great team,” Tverdokhlebova said.

“Competitions are motivating. You are able to see how you are growing, you can see you position and it’s pretty exciting.”