Laureate Education’s CEO rang the Nasdaq’s opening bell this morning to celebrate the launch of the company’s initial public offering. The world’s largest network of degree-granting higher education institutions has become the world’s first public benefit corporation to list on a stock exchange, ten years after it was taken private and more than a year after it first filed for the IPO.

"As a public company we’re even better positioned to support our mission, which is about expanding access to quality higher education"

An updated filing with the Securities and Exchange Commission dated January 18 showed the company planned to offer 29 million shares priced at $17-$20 each.

“Today marks the beginning of a new chapter for Laureate”

However, it announced yesterday it would instead offer 35 million shares of Class A common stock at $14 per share.

Laureate, which operates more than 200 campuses across 25 countries, has also granted its underwriters a 30-day option to purchase up to an additional 5.25 million shares of Class A common stock at the IPO price, less underwriting discounts and commissions.

The shares of Class A common stock began trading today on the Nasdaq Global Select Market under the symbol ‘LAUR’, and the offering is expected to close on February 5.

In celebration of the IPO, Douglas Becker, Laureate’s founder, chairman and CEO, opened the stock market remotely from Baltimore, where the company is based, at 9.15am ET today.

“Today marks the beginning of a new chapter for Laureate,” he said. “We’re excited to join the Nasdaq family as we celebrate our return to the public domain.

“Now as a public company we’re even better positioned to support our mission, which at its core, is about expanding access to quality higher education through unparalleled scale and resources.

“I can’t think of a more exciting time for the company. Today’s move enables us to transform even more lives around the world.”

The IPO marks the first time a public benefit corporation has been listed on any stock exchange. 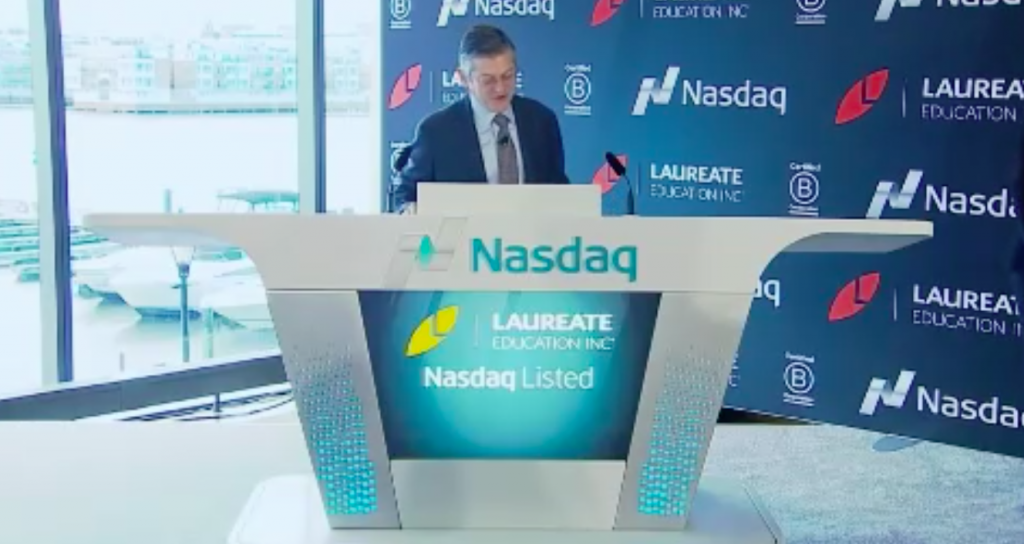 Laureate announced it was converting to a public benefit corporation – a classification of corporation that is required to create a general public benefit that also includes the crowdfunding platform Kickstarter – in October 2015, at the same time as it first filed for an IPO.

“Being the first public benefit corporation to go public is truly a remarkable achievement and underscores Laureate’s focus for creating long term opportunities for its students and institutions,” commented Nasdaq’s president and CEO, Adena Friedman, describing the event as a “huge milestone “.

At the time, Laureate said the stock selloff would be used to pay down some of its $4.3bn debt.

However, the process was delayed by regulatory changes in foreign markets, a student lawsuit and the political fallout from the revelation that the company had paid former president Bill Clinton $17.5m to act as honorary chancellor while Hillary Clinton was secretary of state.

It updated the filing at the end of last year, indicating it intended to go ahead with the IPO, as well as announcing plans to raise $383m from a group of six investors including Abraaj Group and Apollo Global Management.

Founded by Becker in 1998 as Sylvan Learning Systems, a public company focused on primary and secondary education, the company began investing in higher education and sold off its K-12 assets before being acquired by an investor group led by Douglas Becker and Citigroup Private Equity in 2007, when it gained the Laureate name.

Since then, it has grown to encompass 71 institutions teaching more than a million students, including Universidad Tecnológica de México; Xi’an Jiaotong-Liverpool University in China; and Kendall College in the US; and Faculdades Metropolitans Unidas in Brazil.