Posted on Jan 15, 2018 by Kerrie Kennedy
Posted in News, under Asia.
Tagged with Japan, JASSO, UUKi.
Bookmark the permalink.

The number of international students enrolled in Japanese universities or language schools was up 12% last year, with most students coming from Asian countries, new research from the Japan Student Services Organisation has revealed.

"We are interested in looking at places where the UK doesn’t seem to have as well developed networks as you might expect, and Japan is a great example of that"

“[International students] must study Japanese other than their majors. It is a heavy burden for them”

Tomohiro Miyai, deputy director of the Information Service Division at JASSO’s Student Exchange told The PIE News that the Japanese language is often a barrier to international students studying in Japan.

“[International students] must study Japanese other than their majors. It is a heavy burden for them,” Miyai said.

However, he added, Japanese universities have been making an effort to build up their academic course offering in English. 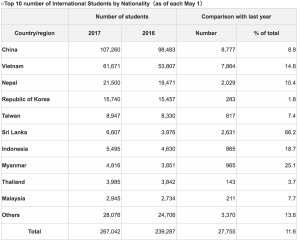 Kai Japanese Language School president Hiroko Yamamoto told The PIE News that the increase in international students coming to Japan is partially due to a change in the statistical system.

“After ‘A Plan for 300,000 Exchange Students’ campaign was released in 2008, the immigration law was amended.

“As a result, the number of students at Japanese language schools started to be included in the statistical figure of international students in 2011,” Yamamoto said.

“The main reason for the rapid increase of international students after 2013 is that a lot of Japanese language schools started to receive students from Vietnam to fill in the huge decrease of Chinese and Korean students after the [Tōhoku] earthquake in 2011.”

Yamamoto said that Japan became a very popular destination for Vietnamese students due to its proximity to their home country and the potential to work part-time.

She said that the decline in Japan’s young adult population has made mobile study more important than ever.

“[There is] a sense of danger to not only Japanese higher education institutions but also companies and the economy…two-way mobility of students is very important.

“The need for Japanese language schools to accept international students is strong. We want more agents to get interested in Japan as a destination,” she added.

Despite the relatively low number of UK students studying in Japan as recorded by JASSO, the statistic is nothing unusual.

Research by Universities UK International revealed just 6.6% of UK students are mobile during their studies, and as part of a national strategy, the UUKi has launched a campaign to double this figure to 13% by 2020.

Commenting on the JASSO findings, UUKi director Vivienne Stern told The PIE News that a lack of understanding about the availability of scholarships and funding is a considerable barrier to mobile study.

“In Japan, there are funding programs to support outward mobility, which are not very well known or understood within UK universities,” Stern said.

“There is increasingly good infrastructure available to support English universities and Japanese universities to collaborate with each other,” she added.

“There are good funding streams, lots of Japanese programs to support academic student exchange and, on the UK side, we have existing funds for research collaboration”.

Asked why UUKi were focusing on Japan, Stern revealed that links between the two countries HEIs has been historically weak, and that is a situation she is keen to change.

“Fundamentally we know that universities perform better when they are well networked. We are interested in looking at places where the UK doesn’t seem to have as well developed networks as you might expect, and Japan is a great example of that.”

“Of course students should take advantage of the opportunity to study in a fascinating place with a very different culture but we think we are kind of in a position where we have to encourage a generational change”.

This process might not be fast, Stern warned, but with small initial steps, it is hoped that mobility between the nations will increase to a larger percentage in time.

“So for now, encouraging shorter periods of mobility, that is where we should focus, just to increase the likelihood of students undertaking some form of mobility,” Stern added.