Posted on May 13, 2021 by Will Nott
Posted in News, under Global.
Tagged with Generation Study Abroad, IIE, Study abroad, US.
Bookmark the permalink.

The Institute of International Education’s Generation Study Abroad initiative resulted in a trebling of growth in study abroad experienced by its partners since 2014.

Nearly 4m people were reached through its #GoStudyAbroad campaign

IIE launched the initiative to “mobilise resources and commitments with the goal of doubling and diversifying the number of US students studying abroad by the end of the decade”.

“There is a need to come together as a community to rebuild, reinvent, and double down on our shared belief”

While the report acknowledged that Covid-19 has “greatly affected study abroad and international education” it highlighted some of the success of the five year initiative.

“Similar to the start of the GSA initiative, there is a need to come together as a community to rebuild, reinvent, and double down on our shared belief that international education remains as important as ever,” the report said.

“IIE is grateful to the partners that contributed to the achievements of GSA on their campuses and programs, and in their respective countries and communities around the world.

“Using all that we have learned from the GSA initiative, IIE supports reigniting our collective effort to advance diversity, inclusion, access and equity in study abroad.

The report found that GSA accelerated US student participation in study abroad – with a tripling experienced at GSA US partner institutions.

It also noted increases in access and diversification with commitment partners awarding over 39,000 scholarships. It said that over 600 new scholarship programs were created as a result of participation in GSA.

Some 75% of GSA commitment partners focusing on diversity reported increases in study abroad participation among the “top populations of focus”. 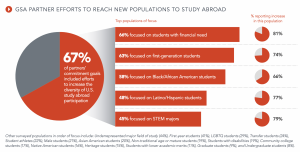 The report also noted how the GSA initiative “amplified the value of study abroad”. Nearly 4m people were reached through its #GoStudyAbroad campaign and there were nearly 50,000 views of GSA videos as well as ten IIE publications and additional digital resources. The GSA initiative saw 17 events with 3000 participants from around the world.

“IIE is grateful for and proud of the 800+ Generation Study Abroad Commitment Partners around the world that pledged to the five-year initiative and that continue to go beyond this initial commitment, driving their organisational strategic plans through evolving times,” the report said.

IIE was the winner of the PIEoneer 2017 Award for Championing Diversity. The 2021 PIEoneer Awards are taking place in London and online on Friday September 3 2021.