Global agency and data insights company, IDP Education has reported a 1.8% decline in its annual revenue, as the Covid-19 pandemic stopped international students from travelling to key destinations and disrupted English language testing.

"In Asia total revenue declined marginally by 0.7% the first decline in 10 years"

IDP’s annual report showed that early on in 2020 the company was going from strength to strength with revenue growth of 19.2% compared to the same period in FY19.

However the financial impact of the pandemic on business meant that revenue declined by 64% in the last quarter of 2020 ending June 30, compared to the same period in FY19 – leading to an overall decline in revenue of 1.8% for the full year.

The report cited disruption to Australia’s international education sector – IDP’s largest destination by volume – and the closure of test centres around the world as reasons for the decline.

Despite these issues, the company saw an uptake of its student placement services in many countries around the world including Canada and the UK – with revenue growth for multi-destination student placement (excluding Australia) rising by some 52%.

“The first half of the year saw IDP achieve record growth across all business lines. In aggregate, we reported a 49% increase in EBIT for the first half,” said IDP chairman Peter Polson and CEO and managing director Andrew Barkla in a joint statement.

“Favourable market conditions and an increasing market share helped drive this excellent performance. Our teams were on track for a record-breaking year as we worked towards our vision of building a global platform and connected community for customers,” they said.

“Whilst our full year financial performance was below our original expectations, we are proud of how our business has responded to events outside of our control,” Polson and Barkla added. 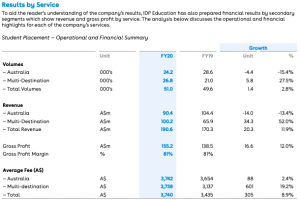 IDP’s report broke down how the different services it offers performed around the world.

Its student placement service saw an overall increase in revenue of 11.9%. Within this figure, revenue for Australia was down 13.4% while multi-destination revenue was up 52.0%.

“Volumes to Australia declined 15.4% which reflected [the] impact of Covid-19 on IDP students unable to travel from China for the semester one intake in February, and uncertainty delaying students’ decisions for semester two,” the report said.

“Growth in Australia onshore volumes and growth in smaller markets of Hong Kong and Nepal were not enough to offset declines from India and China which are IDP’s largest source markets of students.”

IDP said its investment in a ‘multi-destination’ strategy continued to drive growth with a 27.5% increase in total volumes to the UK, USA, Canada, New Zealand and Ireland.

“Canada was the strongest destination market for IDP in FY20 with volumes rising 29%. Positive regulatory settings continued in Canada, and strong execution in IDP student placement offices particularly in India was the key driver of this growth.

“Volumes to the UK increased by 22% with IDP’s focus on the higher quality institutions being rewarded by increasing market share and volume growth in India, Indonesia and the Middle East,” the report said.

“Declines in volume occurred in most markets due to the closure of test centres, however there was a number of markets that despite the impact of these closures achieved growth compared to FY19,” the report said.

IDP’s report gave a breakdown of how overall revenue was affected by region.

In Asia total revenue declined marginally by 0.7% the first decline in 10 years. The report noted that the region includes both India and China which it called “key engines of growth” for the international education industry more broadly.

IDP’s success in India and China was mixed across its different services.

In India, IDP performed well during the year achieving growth in revenue relative to FY19.

“The performance of India benefited from strong student demand for placement into higher education courses to the UK and Canada with Multi-destination revenue growing 80%,” said the report.

However Australian Student Placement and IDP IELTS volume growth in the second half was impacted by Covid-19 and the result was a full year decline in Indian revenues from Australian student placement and IELTS.

“Canada’s revenue decline was due to lower IELTS testing volumes in the last quarter, with that offset a little due to onshore student placement revenue growing strongly off a low base,” the report said.