Posted on Jul 17, 2019 by Claudia Civinini
Posted in News, under Europe.
Tagged with UK, UUKi.
Bookmark the permalink.

UK international graduates report a “lifetime advantage” from their British education and want to maintain their UK connection by conducting further business or research in the country, a new survey commissioned by UUKi shows.

International graduates feel their education has given them an edge in the job market – 87% felt more likely to do business internationally as a result, according to the report, presented at a launch event at the UK House of Commons.

And a high majority – 85% of non-EU and 84% of EU students – crucially felt they are happier than peers who studied in their home country.

She was speaking at the launch ceremony, hosted by Jo Johnson MP, with ministers Graham Stuart and Chris Skidmore also in attendance.

“They also show, though, that the UK enjoys significant returns on the investment we make in our international students,” Stern added.

“Our international graduates act as global ambassadors for the UK, developing an international network of business links, promoting UK higher education and returning to the country as tourists.”

Stern explained that the results show that not only do UK universities do a great job giving their graduates a “lifetime advantage,” but that international alumni wishing to maintain their contact with the UK are a crucial asset for the country.

“Creating a climate that can attract and retain international students in not just in the interest of universities but the whole of the UK,” she said.

It also aims to serve as an evidence base for government and universities to maximise the mutual benefits of international students and graduates.

About two in three respondents said their career had progressed more quickly than peers educated elsewhere, while 82% reported their degree was worth the investment and 83% said it helped them get their job. 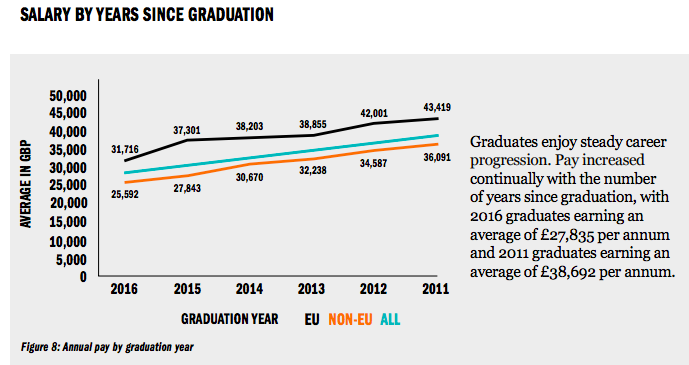 An extract from the report

Almost one in four said that having a UK qualification was the most important factor for their employer, and for international graduates working in their home countries the economic advantage was significant, as they reported earning more than the local average graduate salary.

As for their plans for the future, respondents seemed keen to maintain their UK connections –  81% said they intended to develop professional links with UK organisations and 77% said they were more likely to do business with the UK after their studies, and 77% of postgraduate research graduates said they planned to collaborate with the UK for research purposes.

“We need to see [international students] as the national asset that they are,” Johnson said, adding that while he welcomed the international education strategy, its big ambitions must be matched by adequate policy, such as a more liberal post-study work regime.

Johnson and Paul Blomfield MP tabled an amendment earlier this year which would restore the two-year post-study work permit that international graduates used to enjoy until 2012.

“There is now complete agreement across both sides… about the need to move forward on international students, to celebrate their contribution and reverse some of the challenges we have had in recent years,” Blomfield commented.