Posted on Oct 14, 2020 by Will Nott
Posted in News, under Global.
Tagged with Association of American Colleges and Universities, Global Alliance of International Student Advancement.
Bookmark the permalink.

A new association, The Global Alliance of International Student Advancement, has been launched to champion international students as they face issues related to “Covid-19, government hostility and widespread institutional neglect”.

About Will Nott
Will trained as a journalist at News Associates after studying English Literature at the University of Warwick. He has worked for the Daily Express, VICE and Newsquest where he was a reporter on the Bromley News Shopper. Will has also worked in online TV, where he directed documentaries. He was awarded a Malcolm Bradbury scholarship to study Creative Writing at the University of East Anglia. When not working, Will enjoys reading, writing, cooking and trips to Cornwall.

GAISA aims to advance the outcomes of international students around the world by advocating for the financial, academic, social and wellness aspects of student life.

“Opportunities to transform the educational experience for all students, domestic and international, are squandered”

It will also conduct research and promote collaboration between organisations and individuals, working with higher education, business experts, thought leaders and influencers, to “build a new model of international student success”.

The team behind the new organisation includes founding president Richard DeCapua, a previous faculty member of the University of Northern Colorado, as well as an advisory council of education leaders from around the world.

“The health and political crises of 2020, terrible as they have been, are serving to magnify how many colleges and universities continue to treat their international students, year after year,” said DeCapua.

“Opportunities to transform the educational experience for all students – domestic and international – are squandered when institutions accept the full tuition international students provide while paying little attention to integrating them into the broader community and reducing their burdens to success,” he added.

Members of GAISA’s advisory council include leaders from MIT Sloan School of Management, University of California- San Diego, Lehigh University, University of Pennsylvania and Michigan State University amongst others.

“Amid the very real pain of the current pandemic and the discord that surrounds it, GAISA is stepping up as a steadfast ally and advocate for those who are at the heart of the international student experience, to uncover the complex and pressing challenges they face today,” said Huan Roholt, advisor to international students and scholars at the University of Pennsylvania.

“I am looking forward to facing these challenges head-on alongside my fellow colleagues and experts in international student success,” she added.

GAISA’s research initiatives are being developed in collaboration with the Association of American Colleges and Universities.

The initiatives will focus on building insights into the international student experience around, academics, health concerns, financial and legal issues, social and cultural experiences and workforce readiness.

As part of this research GAISA and AAC&U recorded responses from 87 international students and 245 domestic students between September 14-29, 2020. 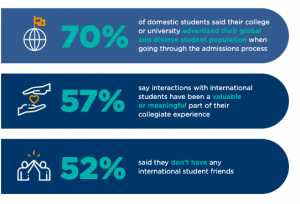 Some key findings were that 70% of domestic students said their college or university advertised their global and diverse student population when going through the admissions process.

“International students were asked if there is something their institution could be doing a much better job at or the one area where they need more help,” DeCapua told The PIE News.

“Many people would perceive that that answer would be something like, ‘I need better programing for orientation, inculturation, getting to know people,’ but it wasn’t.

“It’s money, it’s funding, it’s resources. There is an incorrect perception that all international students come to the US and that they are a wealthy population, and that they have large resources.

“Are there some students that have that? Yes. Is that the majority? No,” he said.

DeCapua said that because international students are perceived to be wealthy it is hard for them to integrate with other cultures on campus.

“There are a lot of barriers for international students to really get to know other students and one of the main ones is this perception of wealth. This certainly has to be addressed,” he said.

President of AAC&U said that her organisation is collaborating with GAISA to understand how institutions are addressing the challenges facing international students with meaningful, evidence-based research.

“The critical need to better support international students has been sharply refocused by the pandemic, elevating the need for institutions to recommit to global learning amidst the stresses of the current socio-political climate,” she said.

Download The PIEoneer Awards White Paper for deep dive insights into this year’s highly commended finalists and winners, and watch videos showcasing all our finalists’ entries.