You are here: Home » News » Former Irish President to receive U21 award

Posted on Feb 17, 2016 by Natalie Marsh
Posted in News, under Europe.
Tagged with internationalisation, U21, U21 awards, Universitas 21.
Bookmark the permalink.

Former President of Ireland, Mary McAleese, has been announced as the recipient of the 2016 Gilbert Medal of Internationalisation, awarded by Universitas 21, which celebrates internationalisation in higher education.

McAleese, who was elected President for two terms beginning in 1997, has been recognised for her commitment to reform and enhancement of international higher education.

The Gilbert Medal upholds and celebrates the objectives of U21 network, which is “to increase understanding, trust and partnership between international universities”, and is named after the late founder of the network, David Gilbert.

As well as her work brokering the Good Friday Agreement in Ireland in 1998, her focus towards the end of her Presidency was tailored towards international higher education.

She was appointed to chair the European Commission High Level Group on the Modernisation of Higher Education in Europe in 2011, where she brought together educational and political leaders to deliver international educational policies.

The award “recognises those whose actions have had a significant impact on international higher education,” said David Eastwood, chair of the U21 network, which consists of 25 member universities spanning six continents. 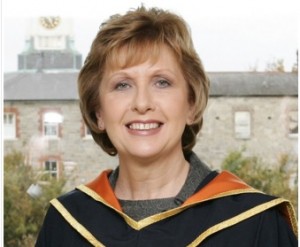 Mary McAleese is being recognised for her work in international higher education.

“Mary McAleese continues to have a significant impact on international higher education and is a role model to many around the world,” he added.

“She is a worthy recipient of this year’s Gilbert Medal from Universitas 21.”

Andrew Deeks, president of University College Dublin, who nominated McAleese for the award, said: “The fact that she has chosen, since the end of her presidency, to use her skills and influence to tackle complex, previously intractable matters in higher education on an international level should be a matter of considerable celebration for the whole higher education sector.”

Former recipients of the Gilbert Medal include Celso Lafer, who was Brazil’s foreign minister on two occasions, and Domenico Lenarduzzi, creator of the Erasmus programme.

The award will be presented to McAleese at the start of May in a ceremony at the National University of Singapore.

The ceremony will also see the U21 Awards for Internationalisation, presented to Wondwossen Gebreyes of Ohio State University in the US and Michael Clifford of The University of Nottingham in the UK.

5 Responses to Former Irish President to receive U21 award