Posted on May 24, 2018 by Claudia Civinini
Posted in News, under Europe.
Tagged with Finland, StudyPortals.
Bookmark the permalink.

Interest in Finland from prospective non-EU students is at an ‘all-time low’ on the online student choice platform Studyportals since tuition fees were announced in 2016, but analysts say the market will inevitably recover.

Tracking interest rates from students from all over the globe (except China), Studyportals analysist noticed that interest started dropping in January 2016, when the introduction of tuition fees for non-EU students was announced.

“Previously, demand for English-taught courses in Finland used to be much higher than supply for Finland. 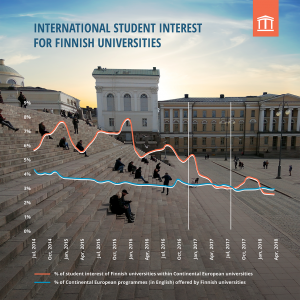 Demand and supply for English-taught programs in Finland. Image and data: Studyportals

“We’ve seen a decrease in the interest of especially non-EU countries in studying in Finland, which only became more pronounced with the announcement of the introduction of tuition fees in December 2016 / January 2017 and their subsequent introduction in August 2017,” she said. 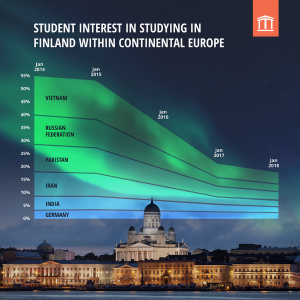 Studyportals CEO Edwin Van Rest said while the drop in interest is clearly caused by the introduction of the tuition fees, other countries, such as Sweden, have experienced a similar drop in the past – and have since recovered.

“We clearly see the recent introduction of tuition fees for Finnish universities influencing non-European students’ interest to study there, and project applications and enrolments to be affected over the next 2 years,” he explained.

“As we have seen from similar patterns in the past, with for instance Sweden, institutions that act strategically can effectively bounce back and recover their position and beyond. I am confident Finland has a strong education sector and great value, with the right strategies, with time, it can look forward to increasing its international student recruitment numbers in the post-fee era.”

Neghina echoed Van Rest adding that a smart scholarship strategy is key for student interest recovery – but ultimately, Finland has its reputation as a safety net.

“Finland still has great universities and is known for its teaching quality. Tuition fees don’t change that,” she said.

“Many small and mid-sized schools have scaled back recruitment outside Europe and follow a “wait-and-see” approach,” he explained.

However, he’s noticed the market is recovering after a dip in interest, with the percentage of Study.eu visitors interested in Finland on par with Sweden or Netherlands, he said.

He also nodded at the well-functioning scholarship system, which he said universities have been good at promoting to students.

At Aalto University, which has campuses in Espoo and Helsinki, the introduction of tuition fees has increased the share of EU applicants for their English-taught master’s degree programs. But while it had some effect on non-EU student numbers, the decrease has been “modest”, a spokesperson said.