The world is witnessing a turbulent time of “democratic backsliding, assaults on human rights, and the rise of authoritarian governments”, according to an international education human rights expert.

Reza Fakhari, vice president for internationalisation at St. Francis College in Brooklyn, New York, has a deep-seated drive to defend political prisoners and end torture, and to educate others about the importance of human rights.

His passion for diplomacy, advocacy, and agency was ignited in the seventies in Iran.

“The Iranian secret service police arrested me for having some books that they considered to be banned. Some of them were books by a progressive sociologist, and some were about political prisoners actively being defended by Amnesty International.”

Because of the connections Fakhari’s father had with the head of the secret service in his small city, he was released after three harrowing days in jail, but was immediately forced to leave the country. “The rest of my friends went to jail for two years. And I came to the US alone.”

In 2014, he had another encounter that changed the trajectory of his life. A former student whom he had helped to establish a chapter of Amnesty International in the college, had advanced in Amnesty International and urged Fakhari to run for the Board. “So, I ran and immediately was elected vice chair, and then chair of the Board.”

As the chair, Fakhari hired the new executive director of Amnesty International USA, Paul O’Brien, and told O’Brien he wanted to establish a human rights program in his college.

The Global Chair of the Board of Amnesty International was recently in conversation with SFC President Miguel Martinez-Saenz on ‘The Noble Pursuit of Human Rights’. 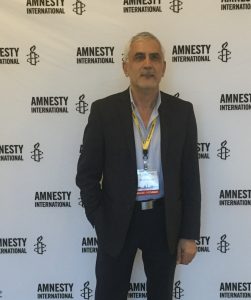 “In terms of curriculum, the first step was to establish a human rights minor. We also have human rights fellows. They are distinguished professors in other universities, corporate leaders, or community leaders who developed and taught human rights courses.” Likewise, he connects it back to core Franciscan principles.

“Essentially the progressive Franciscan mission is to care for the poor; the migrants; to offer radical hospitality; being affordable and accessible; to be servant leaders.”

Under Fakhari’s direction, SFC intends to hold a high school summer program each year that features a human rights institute.

“Through partnership and grant funding, we hope to offer three credits to the participants at no cost. After they successfully finish the institute, they can take more human rights courses or other classes in their senior year. So, when they are ready to transfer to SFC, they could have finished a year of courses.”

“There are some rights that are inherent, inalienable, universal, and don’t depend on cultural context”

SFC is also developing a human rights education course for educators, and will likely move towards establishing a bachelors and masters degree in human rights in the future.

“There are some rights that are inherent, inalienable, universal, and don’t depend on cultural context. Freedom of expression is one of them,” Fakhari said, noting his strong solidarity with women’s protests in Iran, defying the imposition of repressive restrictions.

“You look at your students and understand that this is the moment they should learn, because if they don’t learn now in their years in college, it may not happen later on. Education gives them agency,” he concluded.