Posted on Jul 4, 2018 by Claudia Civinini
Posted in News, under North America.
Tagged with Eastern Michigan University, Tuition fees, US.
Bookmark the permalink.

For international undergraduate, this will mean a reduction of 60% from the tuition rate in force last year

The new policy follows on an earlier decision by the university to offer in-state tuition fees to all undergraduates from anywhere in the US. Public universities in the US can charge higher tuition fees for students coming from another state.

With the inclusion of international students in the new policy, this will mean that all undergraduates enrolling at the university this autumn will pay the same tuition fees, whether they are local, from another state in the US or from overseas.

“EMU is differentiating itself from other universities”

For international undergraduate, this will mean a reduction of 60% from the tuition rate in force last year.

“We operate in a global environment. Students from all over the world are figuratively next door in terms of their accessibility and their interest in attending college in the US,” he said in a statement.

The new policy also hopes to counteract a decline in the number of new international enrolments in the US as evidenced by the Open Doors 2017 report.

The University’s vice-president, communications, Walter Kraft, told The PIE News that universities need to look at the issue of decreasing international enrolments and respond “more creatively,” but the decision is not only aimed at students recruitment.

“We believe it is important for our students, regardless of where they are from, to learn in an environment similar to that which they will experience in the workplace – working side-by-side with people from different backgrounds and cultures,” he said.

“This is crucial to creating the high quality learning and intellectually stimulating environment that exists at Eastern Michigan University, and is one in which our faculty and administration is fully engaged.”

EMU is also a partner in the Temple University’s scholarship program for incoming international students, launched in May at NAFSA, and in the #Youarewelcomehere campaign.

“We believe the message that American universities are supportive and welcome to global citizens, whether they be international students or faculty, is important,” Kraft said.

“We live in an increasingly interconnected global community – nothing says that more than offering one tuition rate for any new incoming undergraduate student, wherever their home. Whether you are from Detroit, California, India, China, or the Middle East – students deserve the same opportunities.”

Kraft said he believed more universities will adopt similar strategies over the next months, and that EMU will share its experience with other institutions.

Rahul Choudaha, executive vice president of global engagement and research at Studyportals, said EMU’s decision is well-timed and “forward-looking” – and in line with the intensifying competition in international student recruitment.

“Given that immigration policies, global rankings and location are uncontrollable factors, institutions must pivot to a goal of identifying the best-fit international student segments and delivering on the promise of value for money,” he said.

“By extending in-state tuition fee to all international undergraduate students EMU is differentiating itself from other universities in terms of value for money.”

In a recently published paper, Choudaha argued that US institutions risk “pricing themselves out” of the international market as rising fees and declining funding opportunities restrict choices for international students.

Past research by Intead and FPPEDUMedia shows that international students are indeed sensitive to tuition rates and interested in scholarships, Intead CEO Ben Waxman told The PIE.

“This move by Eastern Michigan is a smart one,” he said.

“It speaks of their commitment to providing a valuable global education to every student and developing a sustainable revenue stream in the face of the declining domestic and international undergraduate student pool.” 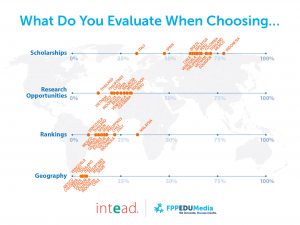 Infographic from 2016 Know Your Neighborhood report by Intead and FPPEDUMedia