Posted on Feb 11, 2020 by Will Nott
Posted in News, under Europe.
Tagged with ELT, English UK.
Bookmark the permalink.

UK-based ELT schools are bracing themselves for serious financial problems because of coronavirus, with providers already reporting lost business from both China and other countries around the world.

The main concerns centre around timing issues with group bookings and nervous parents not wanting to send their children abroad. ELT schools have expressed concern that summer programs will be cancelled as a result.

“Coronavirus could have a massive impact, not just through missed bookings from China or East Asia”

It is just one of the fallouts of the deadly virus that has killed as many as 1000 people in mainland China to date.

During English UK’s Marketing Conference 2020, an ELT school executive told The PIE that ELT businesses will be seriously affected if the situation doesn’t improve by March.

“I think the coronavirus could have a massive impact, not just through missed bookings from China or East Asia, where it seems to be developing, but also from markets that aren’t affected but that may well become affected.

“There are lots of markets that are zero risk tolerant, Italy and Japan in particular. Groups are paying deposits over the next two months, for most people, some people go as late as May 1, and those groups will be struggling to recruit those students, the parents of those students will be hesitating to put down money.”

The executive said that if coronavirus is still top of the news agenda going into March, then companies will have to tighten their belts and exercise force majeure clauses with partners.

The nervousness of parents in certain key markets like Italy has already had an effect on businesses like the Twin Group. Global Sales director at the Twin Group, Simon Baker, told The PIE that a group from Italy had decided not to come because of the virus.

“The parents wanted them [students] to come to the UK but they decided that they were worried about coronavirus in general,” he said.

“So we’ve had an Italian group decide not to come based on coronavirus. Which I was surprised at. The agent had a meeting with the school and the parents decided that they were just generally anxious.”

Lawrence Jackson, head of sales at International House London, said that a key point is if and how the Chinese holiday period is rescheduled.

“So there is talk about a shift in the pattern of when it would be that Chinese schools would have their summer holidays.

“If the virus continues to grow and there is no immediate vaccine or solution, then the knock on effect could be that the dates of delivery are simply not compatible with the dates of travel.”

Jackson explained that if the situation is not contained by mid-March then the majority of the UK schools can look at having a huge drop off in terms of their summer business from China.

“That might be in some cases a good 40% of some peoples’ businesses. Broadly speaking it’s a dominant part of the UK summer business at many schools.

“This year could be a “white-wash” for a lot of UK providers if the situation does not improve very quickly.”

The British Council has published a blog post on the likely scenarios facing UK higher education as a result of the coronavirus. 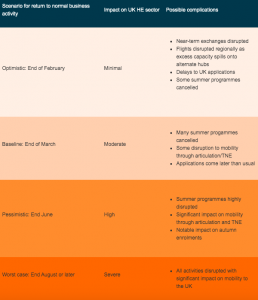 Likely scenarios for UK HE in face of coronavirus. Photo: British Council

The best case scenario outlined by the British Council would involve normal business activity resuming by the end of February.

This in turn would result in minimal near-term exchanges being disrupted, flights altered regionally as excess capacity spills onto alternate hubs, delays to UK applications and the cancellation of some summer programs.

The worst case scenario (if normal business activity resumes by the end of August or later) would see “all activities disrupted with significant impact on mobility to the UK.”

Fraser Deas, head of education services (China) at British Council, said during a talk at the English UK conference that the chances of the best case scenario are very low.

“I think we can pretty confidently say that that is not going to be the case, which means there is going to be some disruptions.

“We really thought that the baseline is the end of March, and to be honest if it gets to the end of March we will see a lot of cancellations for summer programs. I’m sorry to be the bearer of bad news.

Deas said that the British Council is advising ELT schools to trust and listen to their agents as much as possible.

“It’s a very challenging and to be frank, distressing time in China, and whilst if it does mean losses (and course that’s challenging and stressful for you) I think the healthier you can keep your agent relations the better it will be in the long term.”