One of China’s biggest education agencies investigated in an Australian documentary into agent fraud has hit back at the programme’s producers, saying that it has made false claims and “seriously damaged” the reputation of the business.

EduGlobal, one of four agencies named in ABC’s Four Corners: Degrees of Deception programme, which aired in April, said in a statement that it is “deeply shocked” by the programme.

“This programme has insulted an organisation, which is the pioneer of international education in China”

“This programme has insulted an organisation, which is the pioneer of international education in China and has maintained an impeccable record in professionalism, good practice and code of conduct in its 23 years of operation,” the statement reads.

In the documentary, a reporter is shown speaking to education advisers at EduGlobal and three other major education agencies in China – Shinyway, EIC and Aoji Education – asking them whether they will accept a forged academic transcript in an application to an Australian university.

According to Four Corners, the responses given by representatives of each of the companies indicated a willingness to help students to cheat the application process, whether by accepting forged documents or helping them to circumvent mandatory English tests.

“As long as the academic transcript can show a result of at least 70, we guarantee the issue of an offer letter,” an EduGlobal adviser is filmed saying, in footage that Four Corners’ reporter said “raises alarming questions about the integrity of international student admissions to a host of Australian universities”.

In its response, EduGlobal accused ABC of taking the remarks out of context and said that there is “no misconduct” in any of the broadcasting company’s aired or unaired documentary footage.

“The fact that ABC could only pick out two out-of-context and edited sentences made by the EduGlobal adviser from a 20 minute counselling session has shown that the ABC could not prove their point of ‘corrupt agencies’ with respect to EduGlobal,” it contended.

“The ABC program has no doubt seriously damaged EduGlobal’s reputation with its false assumptions aired in the programme,” the statement continued.

“We also keep our options open for possible actions, including legal actions, in seeking justice against the defamation by the ABC programme,” it added.

Two of the four agencies that appear in the documentary – Shinyway and EduGlobal – are certified by the American International Recruitment Council, a membership organisation of agents and tertiary educators in the US which is “continuing to monitor this matter”, according to its executive director, John Deupree. 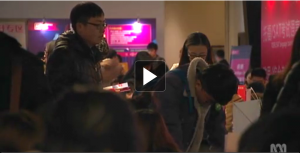 “The AIRC Certification Commission is aware of the ABC broadcast and has followed its due process in investigating the matter with the certified agencies referenced in the report as well as parties involved with recruitment with these agencies,” Deupree told The PIE News.

“The Commission takes any appearances of misconduct by any of its certified agencies very seriously,” he continued.

“With regard to this broadcast, AIRC has also received comments which have noted apparent anomalies and inconsistencies in the ABC program segment and the Commission considers these as well as the initial media report itself.”

All four agencies, which are each members of the Beijing Overseas Study Services Association, have now signed the association’s pledge “to uphold honest principles when verifying student academic documents”.

BOSSA has also released a statement relating to the documentary and agent fraud, after holding a public conference addressing the subject in May.

“This kind of overseas study experience [obtained through a fraudulent application] is not only deemed for failure but also taints the reputation of other Chinese students studying abroad,” its president, Peng Sang, said.

Sang went on to warn that where it exists, fraud among both education agencies and students themselves will “damage the reputation of future Chinese students wishing to study abroad”.

“Chinese study abroad agencies are a part of a specialist industry requiring transnational application processes,” he said. “Every employee’s actions represent not only the agency they are working for but also their country’s image abroad.”

While Sang focussed on addressing fraud at the agent level, AIRC’s Deupree was insistent that this can occur “at any point along the enrolment spectrum”, from parents and students to institutions themselves.

13 Responses to Chinese agency hits back at Four Corners documentary