NAFSA was abuzz with conversation about the resurgence of international programming post-pandemic. Leaders in the study abroad sector shared their predictions with The PIE about timings for the full rebound of the field as well as their takes on hot study destinations for 2023.

“I think it’s going to take a while to get back to where we were with Americans studying abroad,” said William Gertz, chairman at AIFS Abroad, referencing the over 347,000 American students studying abroad each year, who represent approximately 10% of all university students.

He was hearted by the attendance at the NAFSA annual conference, however, and the implications it likely has for the sector. “There’s a lot of new people in the field at NAFSA. 40% of the attendees are first timers, so it bodes well for the field in the future.”

Gertz also highlighted the emphasis on diversity, equity, and inclusion he is seeing across the sector. “We’re all a lot more diverse in our organisations and everybody’s done a lot of hiring – and done a good job at it.”

Michael Green, senior associate VP of College Relations & Advising, at IES Abroad, also spoke with The PIE News about the pent-up demand for study abroad post-pandemic, mentioning the inclination many students have to study in capital cities.

“There certainly is demand for more provincial cities, too, but the capital city is the biggest draw. They’ve always been a draw, but even more so now.”

IES Abroad president and CEO, Gregory Hess asserted that after emerging from a pandemic, many students are keen to connect themselves with a place they feel is “more familiar”, to them and that capital cities often offer that sense of familiarity.

Additionally, Hess mentioned the heightened interest in Seoul as a study destination and the response of IES.

“We’re opening up opportunities now in Seoul. That’s another capital city that students have strong interest in.”

David Puente, associate dean of Academics at International Studies Abroad, discussed the market demand for study abroad. “What we’re seeing is that we are about where we were in 2019. Our expectations were that with pent-up demand for travel abroad, we’d be a little bit higher. But there were some little hiccups in late 2020, 21, [and] early 2022,” he told The PIE. 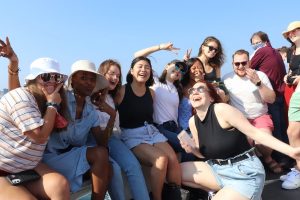 He, too, asserted South Korea as a popular destination. “It’s really booming for us. It’s rivalling Barcelona and Florence now for being our top receiving destination in study abroad.”

He attributed it to the heightened cultural influence in South Korea. “We’re meeting people from all over who are learning Korean at age 14 because they’re interested in the culture. That’s a fascinating thing.”

He also believes the “of-the-moment high tech” programming currently offered at many universities in Korea is a significant draw for students.

When asked about other hot destinations, Puente responded, “I would say we’re going to see New Zealand and Australia ramp back up”.

Stakeholders also hinted that some students had been slower to seek out study abroad opportunities than anticipated as a result of experiences at their home US campuses being limited due to the pandemic.