Australia is keen for its higher education institutions to enter into transnational education agreements in India, while at the same time it is encouraging international students to stay in Australia following the completion of their courses, the education minister has declared.

Speaking at the Australian Financial Review Higher education summit in Sydney, Australia’s minister for education Jason Clare said that migration is set to be a key topic at the upcoming Jobs and Skills Summit this week.

“I also want us to talk about how we make more of what we have already got. At the moment only 16% of international students stay on after their studies end,” he told delegates.

“Wouldn’t it be great if they stayed on and helped us fill some of the chronic skills gaps we have got?”

“A lot of those students are delivering us food and serving coffee in between classes. But when they graduate, they go home. Wouldn’t it be great if they stayed on and helped us fill some of the chronic skills gaps we have got? Seems like a no brainer.”

While other countries have “cottoned on” and changed their visa setting accordingly, Clare noted that “it’s something I think that’s worth looking at here too”.

The UK’s new graduate route is often cited as attracting international students to the UK. In late 2021, the previous Morrison administration in Australia also revealed a post-study work extension to incentivise students to choose Australia.

Clare convened a meeting of the Council for International Education for the first time since the election on August 30 “to kick this around”, he added.

However, sector commentator Andrew Norton has previously written that counting former international students with permanent residency is not “a straightforward exercise”, due to the many direct and indirect routes.

A lot of discussion at the #AFRHigherEdSummit about the stat that only 16% of international students remain in Australia. But that figure is old and not a reliable guide to recent experience. https://t.co/I1VoGs6GDv

“On the publicly-available data we cannot track all the many different visa paths international students might take to PR. Even though fewer former student visa holders get PR after a student visa than a decade ago, larger numbers transition to a new temporary visa,” Norton said in 2021. 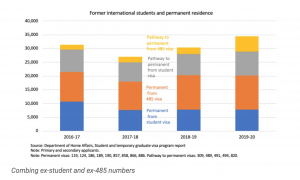 Clare also highlighted the story of Sydney University student Tushar Joshi from Delhi, who formed a group called the Corona-warriors to volunteer to teach people in slums in how to keep safe from Covid.

“He landed nine months ago and he’s already been voted on to the University Council. He wants to do a PhD and work for the UN – because that is where he thinks he can change the most lives. Can you think of a more potent example of the power of education?”

“Dharmendra talked to me about his country,” the minister explained.

“1.4 billion people. Half a billion under the age of 23. We think we have a skills challenge. He’s got the job of getting 50% of young people into vocational and higher education by 2035. That’s his target. That’s nation changing stuff. And he wants our help. He wants to see Australian university campuses in India. He told us so. There’s the challenge.”

The University of Wollongong has already signed a Letter of Intent to set up a campus in GIFT City in Gujarat, with a plan to be operational by September 2023.

“But who will follow? There are only so many Indian students like Tushar that will ever get to study here in Australia. But we can also take that education to them. If we are up for it.

“I hope we are. The benefits for both our countries would be enormous.”

He also announced the next steps in “reforming and improving” the work of the Australian Research Council.

“We are the home of some of the most brilliant researchers and the most cutting-edge research in world,” he said. “The ARC plays a fundamental role in supporting, shaping and sustaining that.”

While the ARC’s work is critical, it needs reform, he continued.

“For a start we need to take the politics out of it. Delays and political interference damage our international reputation and make it harder for universities to recruit and retain staff.”

“Australia’s research system is one of the best in the world – it’s vital we keep it that way,” Universities Australia chief executive Catriona Jackson said. “It is pleasing to see both a new Statement of Expectations for the ARC, as well as the details of the review of the ARC Act.”

An independent review of the ARC and its underpinning legislation will be led by Margaret Sheil, vice chancellor of the Queensland University of Technology, along with Mark Hutchinson, the director of the Centre of Excellence for Nanoscale BioPhotonics and a professor of Medicine at the University of Adelaide and Susan Dodds, senior deputy-vice chancellor and Vice-President (Research & Industry Engagement) and Professor of Philosophy at La Trobe University.

The “formidable triumvirate” will report to the minister by the end of March 2023, Clare added.