Posted on Sep 7, 2020 by Will Nott
Posted in News, under Australasia.
Tagged with Australia, QS rankings, Study Move.
Bookmark the permalink.

A survey of Australian universities by education data consultancy Studymove has found that institutions with higher positions in the QS World Rankings have higher average tuition fees for international students.

The research is the product of six years of work, where Studymove reviewed the international tuition fees for all Australian universities alongside the annual rankings.

“The higher the overall ranking a university has, the higher the annual undergraduate average international tuition fee”

“Our analysis highlights that there has been a clear inverse correlation between fees and rankings for undergraduate programs over the last five years,” a statement from Keri Ramirez, co-founder of Studymove said. 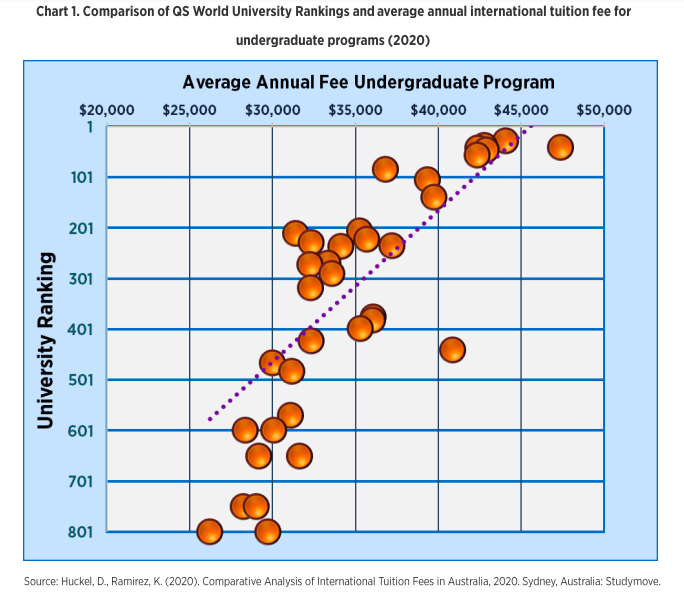 The results were similar for postgraduate international tuition fees.

However, Studymove’s analysis found that there are some exceptions to this rule and other factors also influence how Australian universities set fees.

“We know that there are other elements such as location, graduate outcomes and student experience, for example, which could also increase the value of the overall study experience at a university,” the statement continued.

“So, this general trend may not apply to all universities but it’s clear that this element greatly influences the fee setting approach at Australian universities.”

Studymove found that the relationship also exists at the subject level, after doing an extended analysis for 17 subject areas.

The correlations discovered in the research are expected to continue into 2021, despite the pandemic, according to Studymove.

“As we know, the international education sector is dealing with a period of uncertainty, complexity, and confusion unlike anything we’ve known before,” the organisation said.

Studymove said that to mitigate the uncertainty created by Covid-19, it is expected that the strong relationship between these variables will most likely remain strong in the following years.

“We do however need to consider that in “the new normal” and with a period of high unemployment across the globe, it is possible that international applicants may place importance on other aspects of the rankings such as employability and graduate outcomes offered by each university.”

If this occurs, Studymove noted this may affect the relationship which exists between rankings and internationals tuitions fees.