Posted on Oct 1, 2021 by Will Nott
Posted in News, under Australasia.
Tagged with Australia, housing, Melbourne, Victoria.
Bookmark the permalink.

International students in Victoria, Australia are living in insecure housing that is often unsafe and in poor condition and are at risk of financial exploitation, a report by WEstjustice has found.

Students are being given misleading information by rental providers, which can undermine their rights as renters

The community organisation conducted the International Student Housing Project Report to document housing issues faced by international students in the state and to identify relevant limitations or gaps in current laws and regulatory practices.

Researchers found that students have faced homelessness after illegal evictions and have fallen victim to scams by unscrupulous rental providers.

The report also analysed a number of complaints lodged with Consumer Affairs Victoria and the City of Melbourne on behalf of international students and found that there are gaps and limitations in the rental sector’s regulatory framework.

“International students are an important part of Victoria’s vibrant community, and make a huge contribution to the economy,” the report said.

“Yet many international students end up living in insecure housing, including unregistered and non-compliant rooming houses, sub-tenancies, licences and homestays, and other informal or ambiguous situations.

“These types of housing are often overcrowded, unsafe and in poor condition, and international students living in such arrangements are significantly more vulnerable to unscrupulous conduct and exploitation by residential rental providers.”

From August 1, 2019 to December 11, 2020, WEstjustice delivered the ISALS clinic, in partnership with the Study Melbourne Student Centre to provide legal assistance to international students with accommodation issues.

WEstjustice provided legal assistance to 250 clients in the 16 month period, and reached 319 international students, as some clients attended with housemates. Data collected during the work with clients informed the report.

Its also received data from a survey which received 48 anonymous responses. 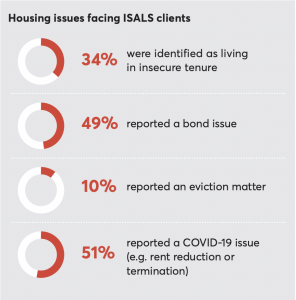 Issues identified by WEstjustice included the non-lodgement of bonds with the Residential Tenancies Bond Authority and the withholding of bonds without cause as well as illegal evictions putting students at risk of homelessness.

Students are also being given misleading information by rental providers, which can undermine their rights as renters and lead to financial exploitation. The report said they also face misrepresentation, deceptive conduct and scams by unscrupulous rental providers that target international students.

It noted the prevalence of students living in arrangements that fall outside the conventional rental provider and tenant relationship, where it is not clear if they are covered by tenancy laws.

“International students also face significant barriers in taking legal action and asserting their rights, such as substantial fears over exercising their legal rights, a lack of access to legal information, as well as delays and the complexity of legal processes,” the authors of the report added.

“Each of our universities has a comprehensive range of services and support systems. They provide a range of information, including housing information, to students at the pre-departure, arrival and orientation stages, as well as on an ongoing basis.

“Any student facing issues with their accommodation is strongly encouraged to discuss the problem with their university,” Jackson added.

Students who want to make a complaint about their accommodation can face challenges due to gaps and limitations in the rental sector’s regulatory framework, according to the report.

“The current regulatory approach is mostly reactive and complaints driven, rather than proactive and investigative, which is onerous on renters who are often not aware of, or not empowered to enforce their rights,” the report said.

“There is a lack of coordination and information sharing between various regulatory authorities and service providers, and particularly between Consumer Affairs Victoria and local councils in respect of rooming houses.”

It also noted there are concerns that regulatory authorities very rarely use enforcement options, such as fines and prosecutions, which undermines any deterrent effect of regulation; and complaints may take a long time to investigate, and complainants are often not made aware of their progress or outcome.

“As tenancy regulations are controlled by eight separate state and territory governments in Australia there can be a large variance in regulatory conditions and frameworks,” IEAA chief executive officer Phil Honeywood told The PIE.

“In some states student accommodation comes under Boarding House planning laws which are not always appropriate for what young people are looking for.

“Happily, in recent years, there has been a big push by our public universities to make safe, welcoming and high standard accommodation for their students a core activity,” he said.

Honeywood explained this has also led to many universities signing up partnerships with the large purpose built student accommodation providers.

“PBSA facilities are almost always of high standard as they need to meet their contractual arrangements with the universities to ensure ongoing referral of students,” Honeywood said.

“In the private accommodation market, state governments also now have a big focus on tenants rights. As with any study destination country, students are strongly advised to do their own pre-departure research and not rely on or commit to any informal arrangements until they have checked for themselves,” he added.

In 2019, over 299,600 international students were enrolled in Victoria, contributing approximately $13.7 billion to the economy through the education sector alone.