Posted on Aug 26, 2021 by Viggo Stacey
Posted in Government, News, under Europe.
Tagged with Afghanistan, Chevening, UK.
Bookmark the permalink.

Chevening students and other scholars from Afghanistan have begun to arrive in the UK as evacuation efforts from the international airport in Kabul approach their deadline.

UK prime minister Boris Johnson stepped in to say the government was “doing whatever we can” to ensure the government-sponsored scholars’ visas would be prioritised.

Campaigners had taken urged the government to reconsider its plans following news that Chevening scholars in the country had been told their offers would be deferred until 2022/23.

Shabnam Nasimi, director of Conservative Friends of Afghanistan, who has been campaigning for the scholars shared that they had arrived in London and Birmingham on August 24.

Really pleased to see this years Chevening Scholars from #Afghanistan arrive in London & Birmingham today with their families. Can’t wait to meet you all! pic.twitter.com/2VPK5nUCzV

Boris Johnson told reporters on August 26 that the “overwhelming majority” of those eligible for evacuation from Kabul has been evacuated, with some 15,000 being flown out from the country.

Along with those eligible for the Afghan Relocations and Assistance Policy scheme, priority groups include: current or former Chevening Scholars; those with existing leave or an open application for student, work, and family visas; journalists and those who worked with British news agencies; and members of womens’ rights groups.

“We raised our voices, contacted MPs and different organisations and influential people in the UK who supported us”

Fakhria Naistani will be joining a masters program in London.

PS: Screaming “Chevening Scholarship” in Afghanistan airport crowd was a moment of proud and identity pic.twitter.com/6yqTl1JkFT

Mustafa Raheal will be joining a program at the University of Bath in October. He had been in the UK since June, before receiving the letter telling him his studies would need to be deferred in early August.

Speaking with The PIE, Raheal described how scholars had campaigned to get authorities to reverse their decision to defer the studies of Chevening scholars.

“We raised our voices, contacted MPs and different organisations and influential people in the UK who supported us, including our universities, they have raised our voice, talked with the FCDO, Chevening and the Home Office,” he said. They also contacted media channels.

“Yesterday the last team came in from Kabul, however, based on some information, more Chevening alumni are still remaining in Kabul,” he told The PIE.

The fact that the evacuation deadline has not been extended will create additional barriers, he continued. 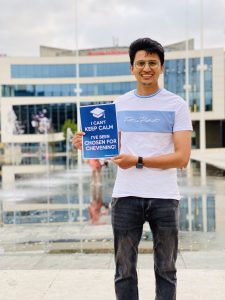 “Many are at risk, [the government] needs to get hold of those who could be evacuated as soon as possible, [or] they will still remain, including some Chevening alumni.”

“We continue to, as a priority, work with UK government departments, international organisations and the university sector to support the safety of all in our international community,” assistant director of UUKi, Andy Howells, told The PIE.

“We are encouraging our members to reach out to the government’s crisis hotline on behalf of any students or staff they understand to be in Afghanistan.”

Despite the approaching deadline and the difficulty for many Afghans to arrive at the airport, Raheal has a “feeling of hope for the future”.

“I am really looking forward to meeting different people who have been texting me and sending me a lot of welcome messages which which are really nice, I’m really keen. And I’m very much looking forward to being in Bath and walk around the city and the university.

“Personally, the course I will take this year will be in international development, conflict and humanitarian action, and the main reason behind the selection of this was to go back to Afghanistan, work with different parties there and make them come up with an inclusive agreement to not only include those who are part of politics, but those who closely work with civil society, with the raising of minority voices, with women, youth and even the academia within the universities,” he told The PIE.

“Now, still I think there is room to work on that. And even after graduation from the Chevening program, we will continue to do that along with the international community.”